Curse of the Double Digits

Today I'm happy to feature Lynn Kelley who has the humorous blog Random Acts of Weirdness.

Children’s author Lynn Kelley worked as a court reporter for 25 years while she and her husband, George, raised their four children. Her first chapter book, Curse of the Double Digits, for ages 7 to 10, debuted on October 10, 2012. She also coauthors the spooky, fun Monster Moon mystery series for ages 8 to 12 under the pen name BBH McChiller. The highlight of her life are days spent with her grandchildren. Most of her time involves books: either writing books, reading books, or making altered art books. She tries her best to keep her overactive imagination in check. 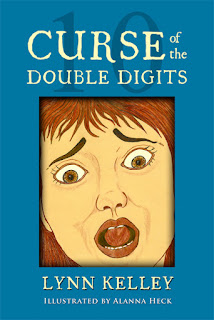 About the book:
The whole class is invited to her party, including , the cutest boy in the fifth grade. So is Darlenie-the-Meanie.

Becky wants to look cute for her big day, but all her plans go wrong. Really wrong. The magic of turning ten disappears before she even has a chance to blow out her birthday candles.

Things get so bad, she refuses to go to her own party. Becky wonders if the Curse of the Double Digits will jinx her forever.

Thanks so much for inviting me to guest post, Bish.

Today I thought I’d talk about one of my favorite memories while working on Curse of the Double Digits.

I wanted to test the story on real kids and see how they reacted. Would they laugh at the appropriate places? Would they like the characters and the story? I read the entire book in two 45-minute sessions to Mariann Kyle’s second grade class at Cypress Elementary School in San Bernardino, California in February of 2008.

It was a great experiment and the kids reacted the way I’d hoped they would. They giggled when Becky, the main character, talked about her crush, Chad.  In another chapter, Becky runs to the bathroom and grabs her dad’s electric razor.  I read the line, “Then she looked at me like I had flushed my brain down the toilet,” and they busted up. That confirmed that kids that age still think any mention of a toilet is funny. Yep, toilets and underwear humor amuses them. Go figure! 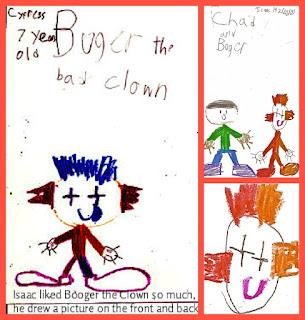 After the second session when I finished the book, Mrs. Kyle surprised me by having the children draw a picture of their favorite character, except for one.  “I don’t like Booger the Clown,” she said. “He’s not nice. Do not draw him.”

Maybe little Isaac wasn’t listening. Maybe it was too much temptation, knowing he shouldn’t draw that character, or maybe he really liked Booger. I’ll never know, but I got a kick out of his pictures. Not only did he draw the bad clown, but he drew him on each side of his paper! I love the way he drew the eyes! 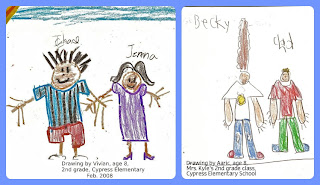 After a Q & A session, Mrs. Kyle put all the drawings in a plastic bag and gave them to me. What a cool keepsake.  I love children’s drawings. Each one is unique, just like the child who drew it.

Knowing that children, their parents, and teachers all over the world are reading my story is ultra exciting.  I’m looking forward to reading it to my grandchildren when they’re old enough. That will be the icing on the cake for this children’s author! 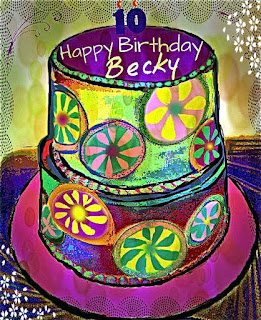 ***
Thanks for coming by, Lynn, and sharing these wonderful pictures!

Curse of the Double Digits is available at the following places. Pick it up for a youngster near you. It would be a great stocking stuffer. (Hint, hint!)