It's my Second Annual BlogtoberFest!
AND it's the first day of National Book Month
So what could be better than a book give-away to celebrate FIVE years of blogging and say THANK YOU to all my Random Followers?

That's right, five years! Who could have known I'd still be at it? Certainly not me.

To celebrate I've got a BIG give-away going on. Not just one, not just two, but FIVE prizes.

The rules are simple.

Did I mention, you can only pick ONE prize at a time?

How's that for simple?

There's just ONE draw-back, this is only open to people living in the United States. (Sorry...)

So what are you going for?


Moon Over Manifest
by Clare Vanderpool 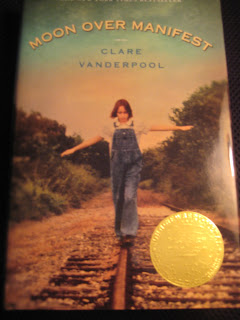 Abilene Tucker feels abandoned. Her father has put her on a train, sending her off to live with an old friend for the summer while he works a railroad job. Armed only with a few possessions and her list of universals, Abilene jumps off the train in Manifest, Kansas, aiming to learn about the boy her father once was.

Having heard stories about Manifest, Abilene is disappointed to find that it’s just a dried-up, worn-out old town. But her disappointment quickly turns to excitement when she discovers a hidden cigar box full of mementos, including some old letters that mention a spy known as the Rattler. These mysterious letters send Abilene and her new friends, Lettie and Ruthanne, on an honest-to-goodness spy hunt, even though they are warned to “Leave Well Enough Alone.”

Abilene throws all caution aside when she heads down the mysterious Path to Perdition to pay a debt to the reclusive Miss Sadie, a diviner who only tells stories from the past. It seems that Manifest’s history is full of colorful and shadowy characters—and long-held secrets. The more Abilene hears, the more determined she is to learn just what role her father played in that history. And as Manifest’s secrets are laid bare one by one, Abilene begins to weave her own story into the fabric of the town.


Island of the Aunts
by Eva Ibbotson AND
Roll of Thunder Hear My Cry
by Mildred D. Taylor 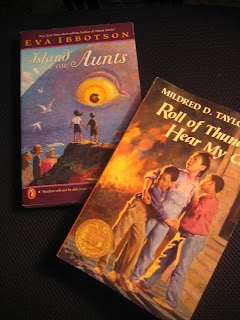 ISLAND OF THE AUNTS

When the kindly old aunts decide that they need help caring for creatures who live on their hidden island, they know that adults can't be trusted. What they need are a few special children who can keep a secret - a secret as big as a magical island. And what better way to get children who can keep really big secrets, than to kidnap them! (After all, some children just plain need to be kidnapped.) Don't miss this wildly inventive and funny read from master storyteller Eva Ibbotson.

ROLL OF THUNDER HEAR MY CRY

Why is the land so important to Cassie's family? It takes the events of one turbulent year - the year of the night riders and the burnings, the year a white girl humiliates Cassie in public simply because she is black - to show Cassie that having a place of their own is the Logan family's lifeblood. It is the land that gives the Logans their courage and pride, for no matter how others may degrade them, the Logans possess something no one can take away.

The Grim and Grimmer trilogy
by Ian Irvine each book signed by the author! 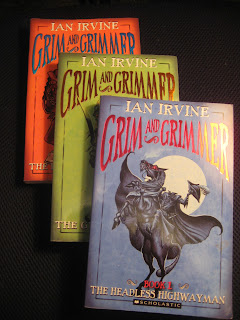 The Fey Queen, Emajicka, is stealing the children of Grimmery for her Collection. She bathes in their nightmares to relieve her own. There is one nightmare she wants most of all.

If Ike had stayed home that Tuesday, he would not have betrayed a princess or robbed a murderous queen. He would not have been tied to an insane imp desperate to eat his liver. He certainly would not have floated across a strange land on an impossible rescue mission, powered by exploding manure. Nor would he have tried to escape via that disastrous troll-bum door...

But can he ever escape the Nightmare Queen?


Where the Mountain Meets the Moon
by Grace Lin 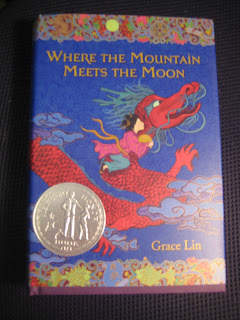 In the valley of Fruitless Mountain, a young girl named Minli lives in a ramshackle hut with her parents. In the evenings, her father regales her with old folktales of the Jade Dragon and the Old Man on the Moon, who knows the answers to all of life's questions. Inspired by these stories, Minli sets off on an extraordinary journey to find the Old Man on the Moon to ask him how she can change her family's fortune. She encounters an assorted cast of characters and magical creatures along the way, including a dragon who accompanies her on her quest for the ultimate answer.

Grace Lin, author of the beloved Year of the Dog and Year of the Rat, returns with a wondrous story of adventure, faith, and friendship. A fantasy crossed with Chinese folklore, Where the Mountain Meets the Moon is a timeless story reminiscent of The Wizard of Oz. Her beautiful illustrations, printed in full-color, accompany the text throughout. Once again, she has created a charming, engaging book for young readers.

The Heart of a Samurai
by Margi Preus 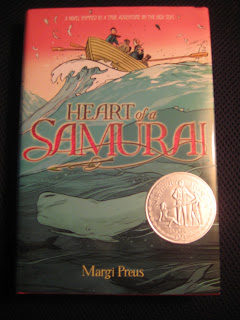 In 1841 a Japanese fishing vessel sinks. Its crew is forced to swim to a small, unknown island, where they are rescued by a passing American ship. Japan’s borders remain closed to all Western nations, so the crew sets off to America, learning English on the way.
Manjiro, a 14-year-old boy, is curious and eager to learn everything he can about this new culture. Eventually the captain adopts Manjiro and takes him to his home in New England. The boy lives there for some time and then heads to San Francisco to pan for gold. After many years, he makes it back to Japan, only to be imprisoned as an outsider. With his hard-won knowledge of the West, Manjiro is in a unique position to persuade the emperor to ease open the boundaries around Japan; he may even achieve his unlikely dream of becoming a samurai.

Each prize will be accompanied by a tatted bookworm bookmark (though not necessarily the one you see here.) 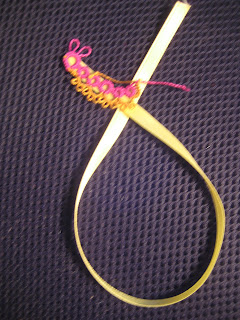 Winners will be announced on Monday, October 29th, the actual anniversary day.

Come one, come all. I'd be thrilled if you spread the word because as with any party, the more the merrier!