The Grand Tour Begins for The Bowl and the Stone

THE BOWL AND THE STONE:
A HAUNTING TALE
FROM THE VIRGIN ISLANDS
is finally here.

Below is the list of the wonderful, fabulous people who will be hosting me on their blogs during the month of October. I hope you'll stop by and visit with me as I share the history and mystery, the stories and insights, that went to into the writing of The Bowl and the Stone.

Although some posts are about the same subject (particularly those mischievous jumbies) each post is different, many with an excerpt from the book. Hope that piques your interest.

Also, for your reading enjoyment, I'm offering up my first Rafflecopter giveaway and crossing my fingers that I did it right! Plus, during week three, there will two other chances to win a copy.

Thanks EVERYONE for all your help. I couldn't have done it without you.

To kick off the tour, today I'm visiting with Carol Kilgore, Under the Tiki Hut, in which you will be introduced to Jumbies, those mischievous spirits that have nothing better to do than cause problems. 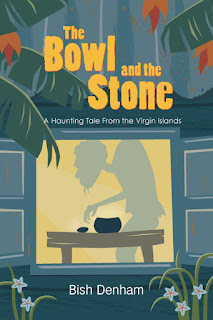 It’s 1962. Sam and her best friend, Nick, have the whole , in the U. S. Virgin Islands, as their playground. They’ve got 240 year-old sugar plantation ruins to explore, beaches to swim, and trails to hike.

But when a man disappears like a vapor right in front of them, they must confront a scary new reality. They’re being haunted. By whom? And why? He’s even creeping into Nick’s dreams.

They need help, but the one who might be able to give it is Trumps, a reclusive hunchback who doesn’t like people, especially kids. Are Sam and Nick brave enough to face him? And if they do, will he listen to them?

As carefree summer games turn into eerie hauntings, Sam and Nick learn more about themselves and life than they could ever have imagined.
Available now at:
Amazon
Createspace
Smashwords

LOOK! A chance to win a signed copy! (Mailing only within the USA)

I've joined this monthly bloghop because answering thoughtful/challenging questions is one way to expand one's mind. It's osted by Michael D'Agostino at A Life Examined .

This could be the last Question of the Month as Michael will be retiring from blogging. He's asked if someone will take over the bloghop and I rather hope someone does.

The question this month is:
“What’s a decision you’ve made in the past that you know, logically, was the right decision to make, but which you still feel guilty or regretful about?”

In my youth I made some rather rash decisions that turned out to be for the best. There may have been a point where I regretted what I did, but days of regret are long gone. Every step I took led me to where I am now, which is a very good place indeed. So there's nothing to regret. Some decisions I made unintentionally and temporarily hurt people, but I made amends and have a clear conscience.
Posted by Bish Denham at 4:00 AM

Email ThisBlogThis!Share to TwitterShare to FacebookShare to Pinterest
Labels: Book giveaway, book release, guest post, The Bowl and the Stone