Jessica Bell is a literary women's fiction author, poet and singer/songwriter who grew up in Melbourne, Australia, to two gothic rock musicians who had successful independent careers during the '80s and early '90s.She spent much of her childhood travelling to and from Australia to Europe, experiencing two entirely different worlds, yet feeling equally at home in both environments. She currently lives in Athens, Greece and works as a freelance writer/editor for English Language Teaching publishers worldwide, such as HarperCollins, Pearson Education and Macmillan Education.In addition to String Bridge, Jessica has published a book of poetry called Twisted Velvet Chains. A full list of poems and short stories published in various anthologies and literary magazines can be found under Published Works & Awards, on her website.From September 2012 Jessica will be hosting the Homeric Writers' Retreat & Workshop on theGreek island of Ithaca, home of Odysseus. 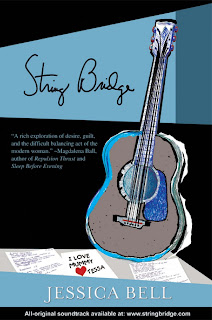 From the back cover: Greek cuisine, smog and domestic drudgery was not the life Australian musician, Melody, was expecting when she married a Greek music promoter and settled in Athens, Greece. Keen to play in her own shoes, though, Melody trades her guitar for a 'proper' career and her music for motherhood. That is, until she can bear it no longer and plots a return to the stage -- and the person she used to be. However, the obstacles she faces along the way are nothing compared to the tragedy that awaits, and she realizes she's been seeking fulfillment in the wrong place.

Melody's life is a labyrinth. Just as she thinks she understands something, or has things figured out, she comes to a dead-end or another branch in the road and has to make yet another decision about what she should do.

There is her husband, whom she is not convinced is being faithful, and of whom she is somewhat afraid. There is her dominating mother (who abused Melody as a child) and wimpy father. There is the reappearance of an old lover and the fantasy of a cheating with someone else entirely. There is her job and the possibility of  promotion and relocating to England. There is her strong desire to return to playing music. But most importantly, there is her young daughter. And, at times, she fears she may be going crazy.

Everywhere Melody turns, her own wants and needs seem to be pushed aside by the wants and needs of others. Suffice it to say, as the pressure mounts, Melody will have to make choices. The question is, will they be the right ones?

There will be no spoilers here. From the first paragraph I was drawn in.

"If music were the wind, I would live in a hurricane. If it were a mother, I would sleep in her soothing womb. If I were music, I would simply be me, shrouding my existence in a monsoon. But I am not music, even though my name, Melody, suggests I could be. The closest I get to be 'being' music, is playing it, living it, embracing it as if it were the organ most vital to survival. I might say it was my heart. But no...I can't give it a name, because it's more like a sixth sense."

This was, at times, a hard book to read because Jessica Bell did not let up on the pressure. Just when I thought there might be a bit of breathing space for Melody, that things were about to work for her instead of against her, here came another dead-end, another turn in the labyrinth of her life, leading into yet another maze. As difficult as it could be, I was pulled along. I wanted, needed, to know what was going to happen to Melody. And I did find out.

Also available is this sound track, that accompanies String Bridge and can be bought separately. 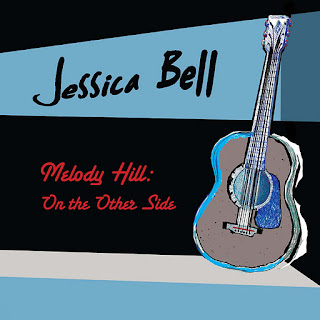 Here are the links.