Last week I wrote a little bit about Spirit Trees, trees that at one time people in the Virgin Islands believed contained spirits. This week is not about Spirit Trees as such. It's about trees that have been around for a long time, old trees that I feel deserve some special attention. If these trees don't have spirits in them, they ought to.

In south east corner of Emancipation Gardens on St. Thomas, grows an ancient casha tree. This particular brand of Acacia (in the Mimosa family) is native to the Caribbean. How it managed to
survive is fodder for a story because these trees have brutal inch and a half to two inch long thorns that can pierce tires and shoe soles. It has lived through a time when the ocean lapped a few feet away, through the making and paving of streets and building of buildings. For some reason it was never targeted as a nuisance tree that should be gotten rid of. Instead, it was allowed to grow and its twisted ropy trunk is a wonder to behold. 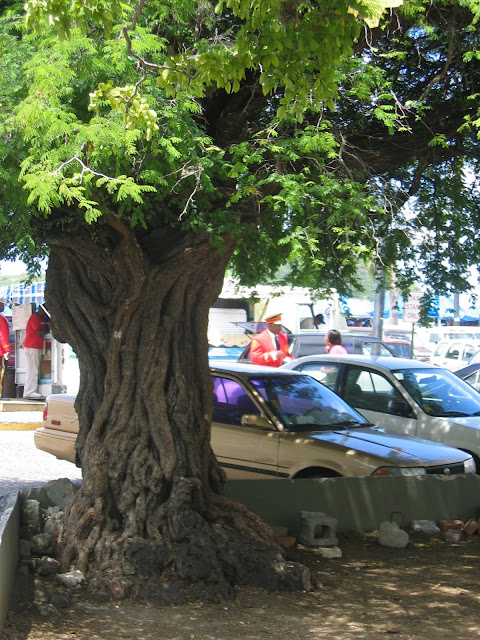 Down the street from Emancipation Gardens is a park which dates back to 1764 and was originally called Coconut Square. In  1945 it was renamed Roosevelt Park to honor a visit made by Franklin D. Within the park are two baobab trees, the seeds of which were brought to the islands with slaves. These trees were definitely thought of as sacred because they provided food and shelter. There is one baobab on St. John (click on the link and you can see a picture of it) and another on St. Croix which is about 250 years old. Because these trees are basically filled with water they don't have rings so age is approximated by the diameter of the trunk. I have no idea how the trees are in Roosevelt Park, but they must be at least 200 years old. 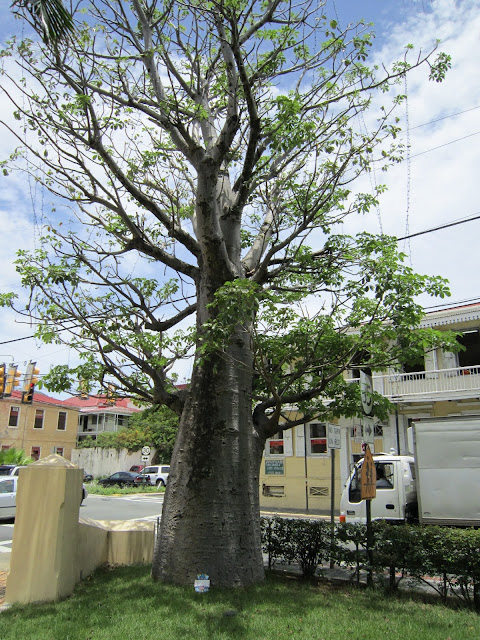 On St. John at Cinnamon Bay - home of the National Park Campground - there is this huge rain tree. They are native to Central and South America and probably came into the Caribbean with the various Indians as they migrated up the chain. That's my friend, Margaret on the left and me giving you an idea of its size. 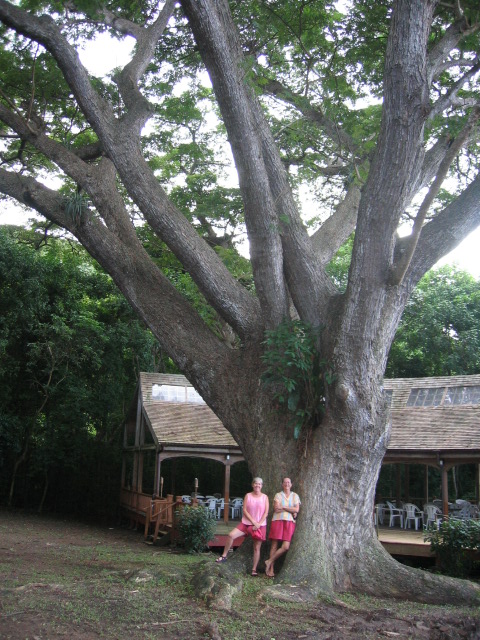 The lignum vitae, also known as ironwood, is a very slow growing native of the Caribbean. The wood is so dense and heavy it sinks in water. Because it is self-lubricating and so hard it is still used for making bearings. It is the national tree of the Bahamas and Jamaica. They only grow to about 40 feet, but don't let the size fool you. This one at Cowpet Bay on St. Thomas is probably several hundred years old... 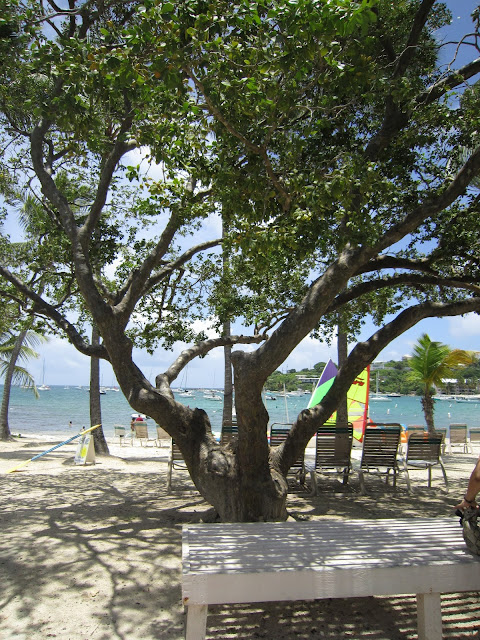 ...as is this one in Cruz Bay, on St. John. As you can see, they tend to branch out low to the ground and make nice shade. Clusters of very pretty purple flowers bloom in the late spring. I don't know what kind of tree this one is, but it can be found at Magens Bay on St. Thomas. Long ago a storm blew it over, but it kept right on growing. That's Margaret, demonstrating the width of the roots. 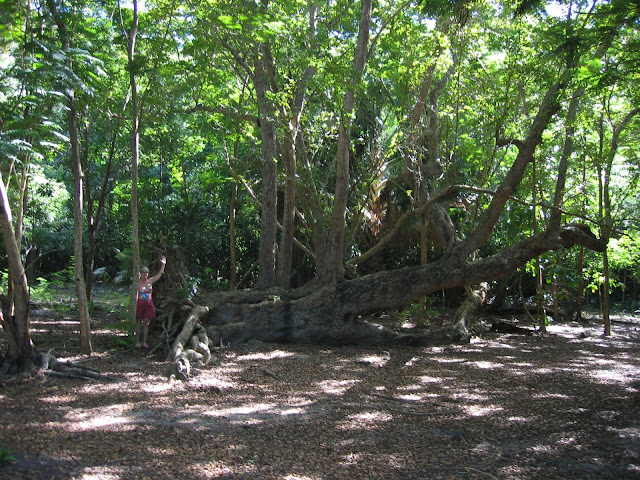 And this is a group of classmates posing on the trunk. I'm second from the left. 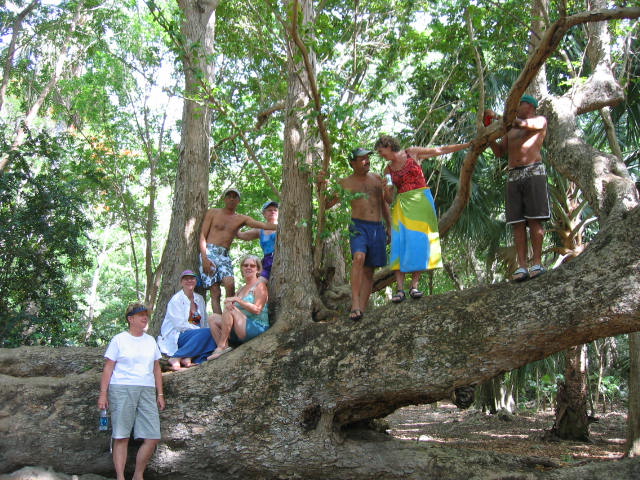 All of these trees are, to my mind, Spirit Trees. They have survived hurricanes, floods, earthquakes and human beings.


It seems the more gnarled and twisted a tree is, the more we love it. Certainly the older a tree is, the more we cherish it, respect it, honor it. We can see in those places where it has been scarred by life, and in its very rings, the history of time. Those scars give it character and we are awed by its ability to survive. We like to go to these trees and sit beneath them. We like to hug them. Some of us may even talk to them.

I have often wondered why we do not seem to look upon our elder human beings in the same way. Should not their wrinkles, their gnarled and twisted limbs and the scars they bear be as loved and cherished as an old tree?
Posted by Bish Denham at 4:00 AM