Trees play a prominent roll in our psychology, mythology and collective unconscious. Yggdrasil, of Norse mythology, is the World Tree that supports the heavens. In the Bible we have the Tree of Good and Evil and the Tree of Life. Buddha sat under a Bodhi tree and attained enlightenment. There are oracle trees, wishing trees,  evil trees and sacred trees. They have roles in fairy tales and in modern literature - think of Treebeard, the Ent.

In long ago times in Africa there were Spirit Trees. These were trees under which people sat and told stories, where lovers met in secret, or where those who had lost a loved one went to mourn. They offered shelter, protection and comfort.


Among the more beloved of Spirit Trees was the tamarind. Native to tropical Africa, it was brought into the Caribbean with the slaves and is one of the most widely distributed trees in the world. They are slow growing and can reach 60 to 80 feet with a cool shady spread of 40 feet. The brown fruit pod, with delightfully sour brown meat, is used in many foods. 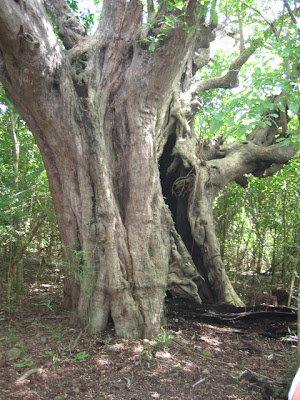 This ancient tamarind is on the trail between Lameshur  and Reef Bay on St. John. At some point in its life it was split in half. The hollow space inside is large enough for two or three people to stand in. In a pinch you could build a roof and live inside it.

It is easy to imagine groups of slaves, after a long day in the fields, sitting under these trees telling stories, passing on oral traditions. I think too, the tamarind may have provided a thin thread, connecting them to a homeland that was lost. 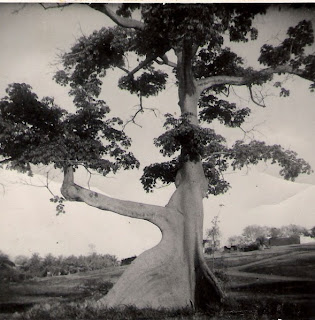 The kapok, or silk cotton tree, was considered magical and housed spirits called jumbies. These trees came into the Caribbean from South America. They can grow to 150 feet with buttress roots supporting their great height. The soft silky "cotton" from the tree was once used to fill life preservers.

I took this picture of the kapok tree at Caneel Bay with my little red Brownie camera when I was eight or nine. I think it's the only picture I took with that camera that has survived the ravages of time. 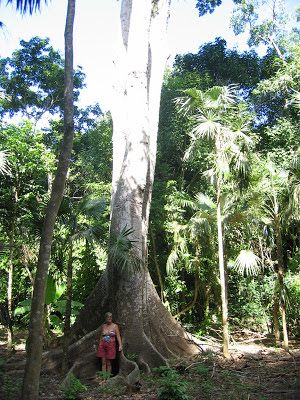 This is a kapok at Magens Bay on St. Thomas. That's my friend, Margaret, standing amid the roots to give you a sense of size.

Next week Monday, more about large spirit trees of the Virgin Islands.

Do you have any big old trees in your yard or near where you live? Do you hug old trees when you get the chance?