Ring Out the Old, Ring in the New

I'm glad to be shaking the dust of 2013 off my feet, glad to be facing into a New Year.

I can't say it was all bad as I did manage to complete a novel writing course which entailed finishing the most complicated and difficult novel I've written to date. 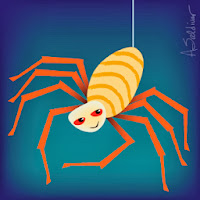 I truly wanted to get my Anansi stories out in 2013, but it was not to be. I know they will come out sometime 2014, I just don't know when. The rascally spider is impatient, not that I blame him...

I managed to read 38 books, not quite as many as I usually read in a year, which is closer to 45. But then, some of them were very long, as was the incredible Monster Blood series by D. M. Cornish. As I'm a slow reader it took me a while to get through the three books. But I enjoyed them immensely. I'm not sure what this list says about me except that I might be eclectic. There's history: Celia, A Slave - autobiographical fiction: Frost in May - and satire: Ptomaine Street. There's classics: A Tale of Two Cities - Science Fiction: Time's Eye - romantic mystery: Solomon's Compass and short story anthologies: The Weight of a Feather. There's middle grade, young adult and adult, historical and contemporary fiction, humor and drama. There seems to be a little bit of everything.

38. Celia, A Slave: A True Story by Melton A. McLauren
37. The Red Tent by Anita Diamant
36. The Big Wave by Pearl S. Buck
35. What Jamie Saw by Carolyn Coman
34. The Insanity of Zero by Michael Offutt
33. Ptomaine Street by Carolyn Wells
32. Muted: A short story in verse by Jessica Bell
31. Cross-Eyed by Sarah Allen
30. The Weight of a Feather and Other Stories by Judy Croome
29. Saving Sam by J. L. Campbell
28. How to Publish and Promote Your Book Now! by L. Diane Wolfe
27.Volition by Lee Strauss
26. The Time Fetch by Amy Herrick
25. Solomon's Compass by Carol Kilgore
24. The Foul and the Fallen by Kevin McGill
23. When Boats Breathe and Cities Speak by Kevin McGill
22. Nikolas and Company by Kevin McGill
21. A Tale of Two Cities by Charles Dickens
20. Viking Warrior by Judson Roberts
19. Frost in May by Antonia White
18. Foundling by D. M. Cornish
17. Lamplighter by D. M. Cornish
16. Factotum by D. M. Cornish
15. Shades of Earth by Beth Revis
14. The City of Ember by Jeanne DuPrau
13. Silent Thunder by Andrea Davis Pinkney
12. Behind a Mask, or A Woman's Power by Louisa May Alcott
11. Stopover at the Backworld's Edge by M. Pax
10. Sunstorm by Arthur C. Clarke
9. Time's Eye by Arthur C. Clarke
8. The Marvelous Land of Oz by Frank L. Baum
7. Weighted by Ciara Knight
6. Year of the Big Thaw by Marion Zimmer Bradley
5. The Magic Soap Bubble by David Cory
4. Love, Tink by Elle Strauss
3. New York, New York by Elle Strauss
2. Uncle Tom's Cabin by Harriet Beecher Stowe
1. Zachary Pill: Of Monsters and Magic by Tim Greaton

Now, help me ring out the old and ring in the new.


What do you look forward to in 2014? And what does your reading list look like?
Posted by Bish Denham at 4:00 AM