G is for Gifft Hill

I've written about Gifft Hill alot. You can take your pick HERE.

We Denhams were the first white people to live up at Gifft Hill and there is no question it was our favorite place. It didn't matter that it was a shack without running water and electricity, that there were holes in the floor, or that yellow mushrooms sprouted from the walls around Christmas, there was something magical and wonderful about the place. 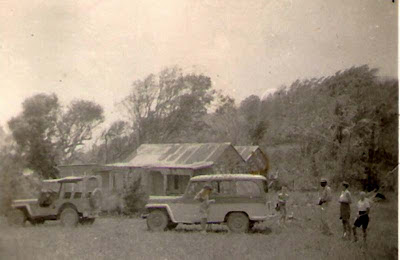 Me, at around six with our dog, Happy. My sister Erva, at ten or eleven. It looks like we were destitute, but we weren't. You can see behind her a stone cistern my father was building, something we all had a hand in making. 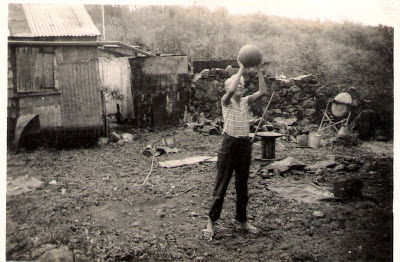 Happy, my mother and me, (still around six year old) in her rock garden. The 55 gallon drums contain gasoline and kerosene. The large tree in the background to the right was where my father hung a swing on my 10th birthday 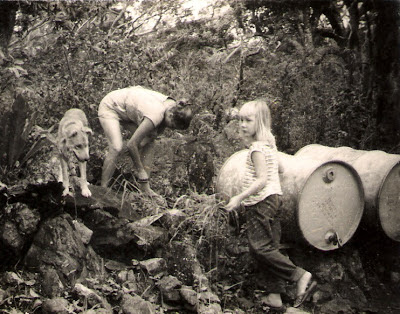 This is where we took our baths. The cistern is near completion. 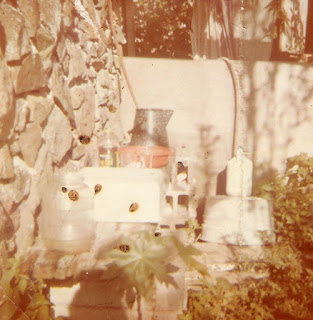 Having to sell the property and move to St. Thomas was a heartache for all of us.Here is my father's cistern as it looks today. 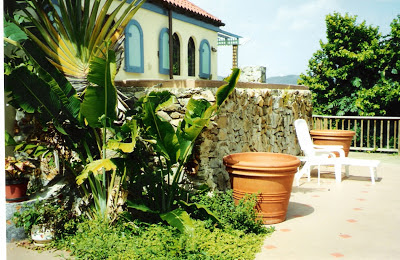 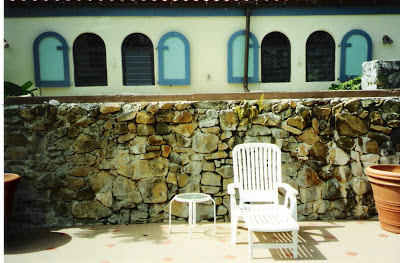 And this is the view I had from my swing, sans houses and roads. 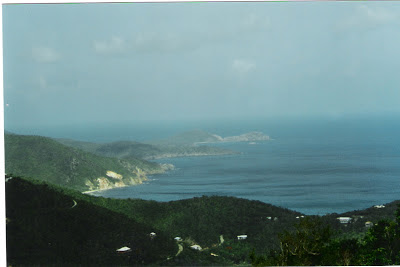 Other G Names:
Great Cruz Bay, St. John
Genti Bay, St. John
Green Cay off St. Croix is a National Wildlife Refuge
Grass Cay is between St. Thomas and St. John
Gorret Rock is off the north side of St. Thomas
Grouper Point is on the east end of Thatch Cay 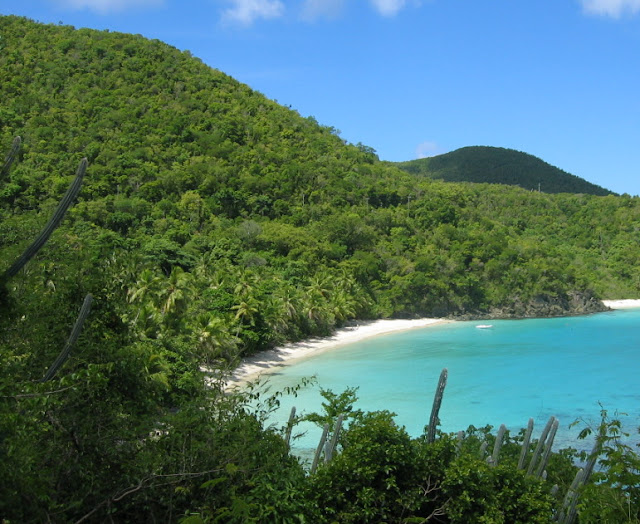 Government House on Government Hill, St. Thomas, built between 1865 and 1867. 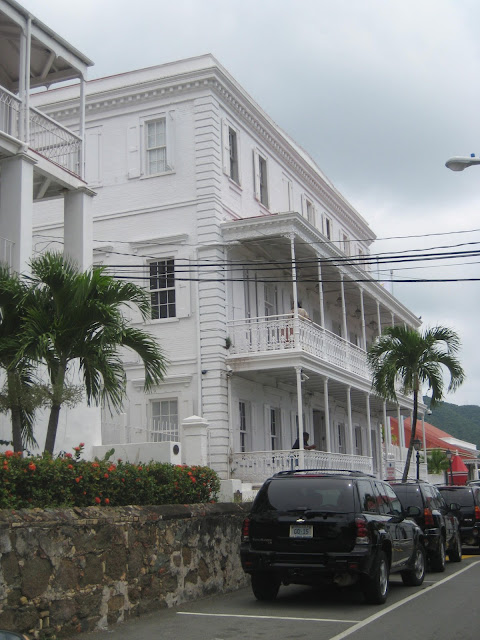 The Grand Hotel, St. Thomas
Built between 1839-40, The Grand was a favorite watering-hole for many locals. It had a ball room and lovely upstairs terrace overlooking Emancipation Gardens (to the right in this picture) where one could get THE BEST hamburger, fries and soda or tea, for $1.00. Now it is shops and offices. 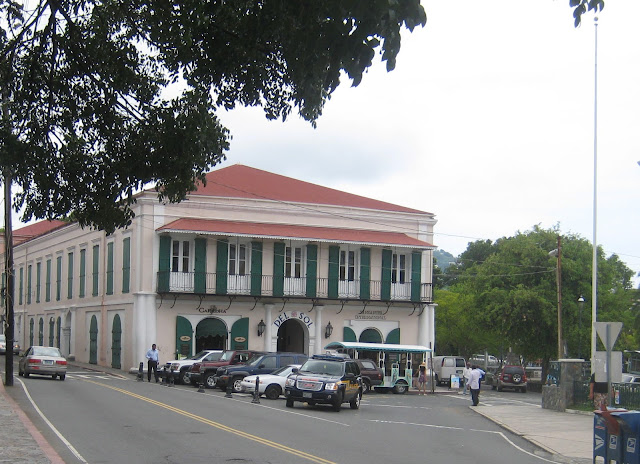 Government House, St. Croix, was build built around 1830 and housed the government until 1871 when it was moved to St. Thomas. However the building continued to be used for governmental purposes. Today the buildings host special governmental cultural and social events. 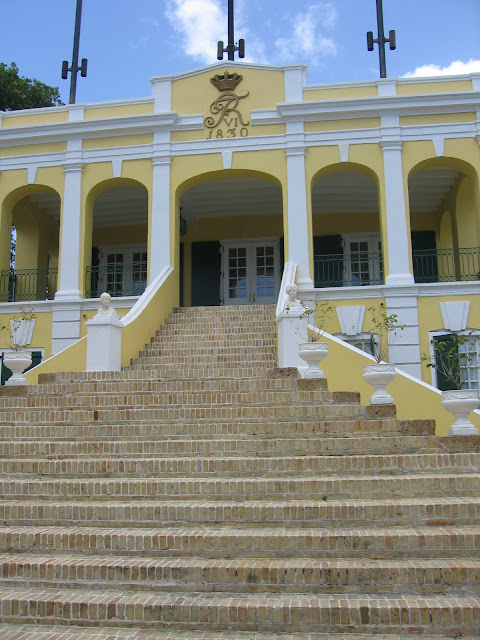 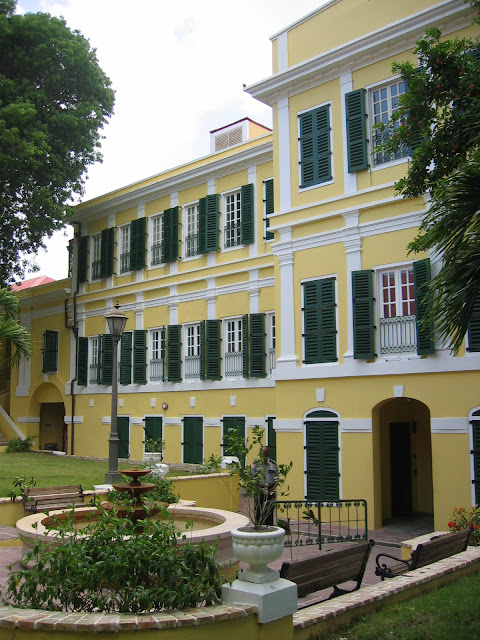 The ballroom inside Government House. 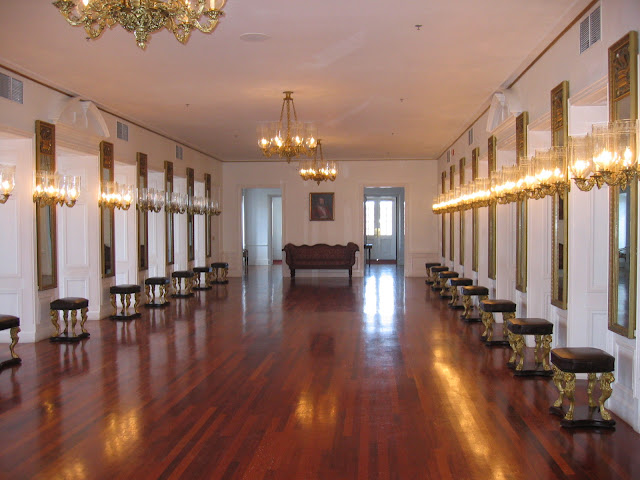