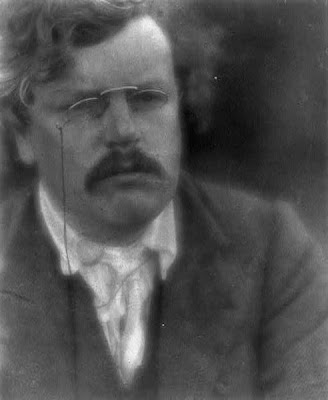 The other day I stumbled upon today's quote which is from G.K. Chesterton. Doesn't he look like a hoot?

Why have I not heard of this guy before? He was a contemporary of Oscar Wilde and close friend of George Bernard Shaw. He had wit.
Here's just a brief quote from Wikipedia: "Chesterton wrote around 80 books, several hundred poems, some 200 short stories, 4000 essays and several plays. He was a literary and social critic, historian, playwright, novelist, Catholic theologian and apologist, debater, and mystery writer. He was a columnist for the Daily News, the Illustrated London News, and his own paper, G. K.'s Weekly; he also wrote articles for the Encyclopædia Britannica, including the entry on Charles Dickens and part of the entry on Humour in the 14th edition (1929). "
Check out these quotes, they're great! (Must go find some of his books.)
So here's the quote that really popped my cork. I had a mini-epiphany, a small extremely bright light came on and is calling me out of the fog.

A good novel tells us the truth about its hero; but a bad novel tells us the truth about its author.
I've read/heard a lot about truth in writing and/or writing the truth. I thought I knew what they were talking about, nodded my head sagely in agreement. But I didn't know that I didn't know what people were talking about. It's different now. Not only do I realize I didn't understand what people were talking about, I understand what writing the truth is supposed to be. This quote states the matter so simply, so clearly, I would have to be a total and complete ignoramus not to get it.
Have you had an epiphany lately? Has something someone said, or a quote, (or book or movie) caused a spark of understanding to blaze in the darkness leading you to the truth? Do please share. Inquiring minds and hearts want to know.
Posted by Bish Denham at 12:00 AM