Although Grammy ran her guest house without electricity, it was not primitive. She had gas stoves and kerosene refrigerators. There was also running water (gravity feed) and toilets that flushed. However there were no hot water showers. This is picture of my cousin Eve in the pantry. You can see one of refrigerators on the left. 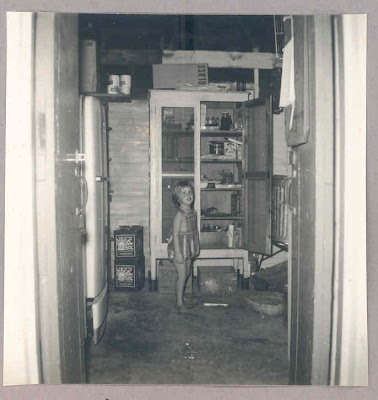 This is a picture of Grammy's office at the bottom of the stairs, the same stairs I saw her come down the night we arrived and I met her for the first time. You can read about it here. 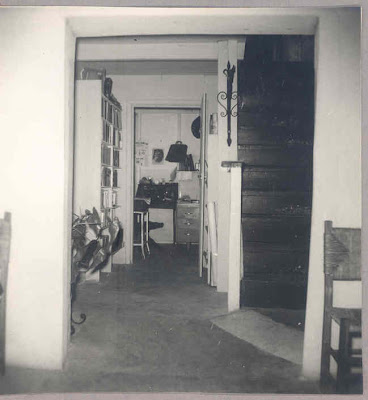 This is the upper hallway at the top of the stairs. That wall is part of The Pullman, a small room perfect for one person. 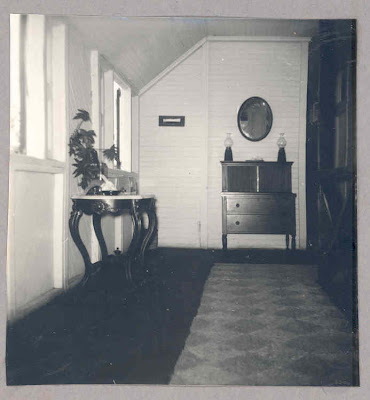 This is Grammy on the main porch doing some mending. 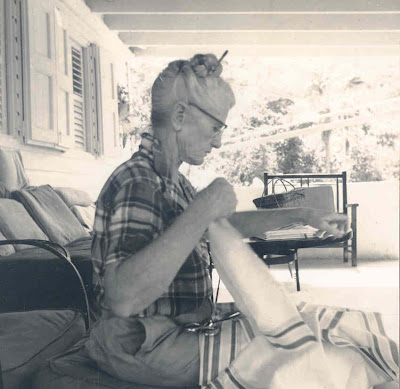 What Grammy provided her guests, besides great food and good conversation, was privacy. Many of her guests were professionals, lawyers, doctors and the like. They were people who dealt with people year-round and what they wanted was a place where they could get away from the hustle and bustle. Trunk Bay was that place. No telephones. No radios. No noise except for what nature provided. It was a place where people could, for a while at least, disappear.
Among some of her more well known guests were: Karen Horney, psychiatrist. Dr. Robert J. Oppenheimer, physicist. John Dos Passos, author. Otto Fried, painter.
Many of her guests were regulars, they came every year at the same time. One of them was a gentleman named Don Braested (pronounced Bray-sted.) He was an older man, with silver hair, who always stayed in the Pullman. He taught my sister, Erva, how to play Canasta and Bolivia. But with me, Don was pleased to spend his afternoons playing Go Fish and War. I missed him when he had to return to the states and I looked forward to his return. Although Erva would play Fish and War with me, she didn't necessarily want to play every day. But Don would and did.
Below are two pictures he took. This is me on the main porch of the main house. The tile top table I'm sitting on is where Erva and I played Pick-Up-Sticks. I remember the young skinny man in the background. He used to play Clue with Erva and other guests. I wanted to play Clue, but I didn't have a clue about how to play. And look at all those books! 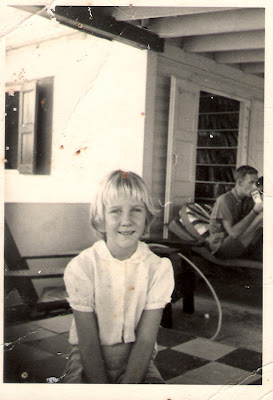 The same day the above picture was taken, Don took the one below of me and Erva. It is my all time favorite picture of us. You see, Erva was twelve, going on thirteen. I was eight, going on nine. Erva was experiencing a tremendous growing spirt. (She grew six inches in six months. People thought I was like five years old because I was so small next to her.) The problem is, she was in pain, she was anemic, she was tired, she was clumsy, she was no longer patient, plus she had reach puberty (something I didn't know ANYthing about.) With all of that going, Erva, who had always been my best friend, turned into an Alien Monster. The day this picture was taken, she did not want to do it. She was being ornery and didn't want to smile. So there it is, my wee hand has snuck across the gulf and I'm tickling the Alien Monster, who despite all efforts starts to laugh and it is just at that moment that Don snapped the camera. 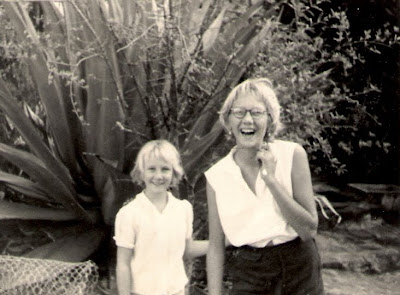 Oh just look my satisfied, mischievous face. I am unafraid of the Alien Monster, I know how to make it laugh!
Posted by Bish Denham at 12:00 AM