The guesthouse at Trunk Bay comfortably housed fifteen guests, more with a little stacking. All the rooms were named. The North Terrace had two bedrooms with a connecting bath, perfect for a family of four. The Chicago Room was the breeziest and held two. The Green Room, painted a pastel green, also accommodated two. The Pullman was a tiny space perfect for a single person. Just below the Main House was a small building called The Shoe Box. It had two rooms, each with their own bath for a total of four people.

In this picture (scanned from a book called St. John Backtime by Ruth Hull Low and Rafael Valls) you can see the Main House on the left with a clear view of the North Terrace rooms on the ground floor. The Shoe Box is the little building clinging to the edge of the cliff. On the beach is a store house, the first building built at Trunk Bay, around 1929. 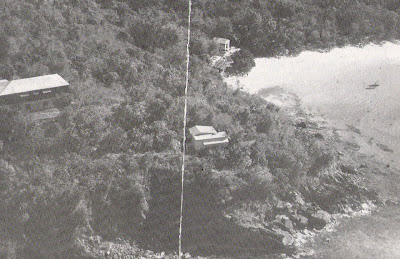 This is a picture of my grandmother, Erva Boulon, with her niece Bobby on the North Terrace. 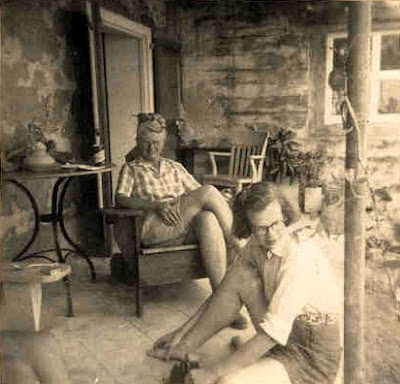 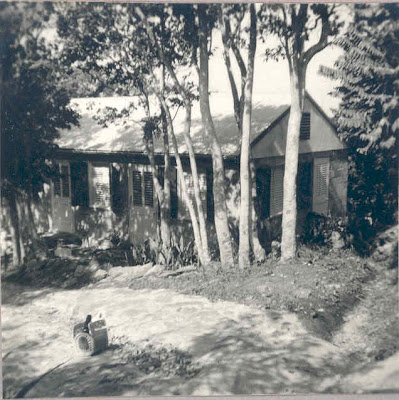 Grammy cooked three meals a day without electricity and on Saturdays during the high winter season charter boats full of people from St. Thomas and Tortola came for her luncheon buffet (reservations were required.) She put on quite a spread which included (but was not limited to) fancy aspics, fish chowder, cold cuts, home made breads, jellies, and desserts.

Of course, she could not have done it all by herself. She had help. Two of the people who worked for her were Thelma and Godfrey.They were a black couple who lived in a building down on the beach in the coconut grove. I remember Godfrey as slender and fairly tall. Thelma was stout and large bosomed.
He helped with cleaning while she helped in the kitchen. Every morning Godfrey went to all the rooms, gathered up the kerosene lamps and brought them to a place next to the kitchen. He'd put on a large bib-apron before he began. Then he carefully trimmed the wicks, filled them with kerosene and cleaned the glass chimneys. Sometimes he'd let me help clean the chimneys. My hands were small and I could get up inside the narrow part. It wouldn't be long and my arms would be covered in soot. Sometimes I helped him pulled sheets off beds.

This is Godfrey washing dishes. 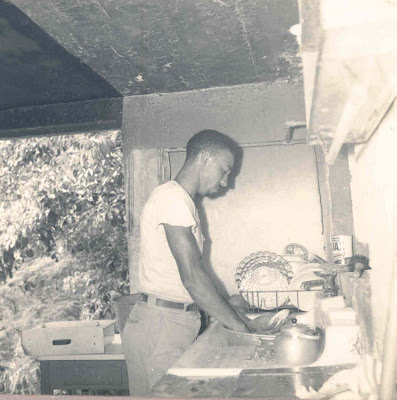 My favorite times with Thelma were spent cutting up vegetables in the kitchen, pictured below. Unfortunately I don't have a picture of her. She would set me up by the window on the left with a knife and green peppers or onions or carrots or papaya or mamie apple and there I'd sit on a stool pealing, slicing, chopping. The experience taught me how to wield a sharp knife. That's Eulalie on the left and Dali on the right. The two children are my cousins, Rafe (the taller one) and his sister Eve. That's Grammy's spice rack to the right of Eulalie and you can see a yummy home made loaf of bread sitting on the counter. (Looks like Rafe is eyeing it.) 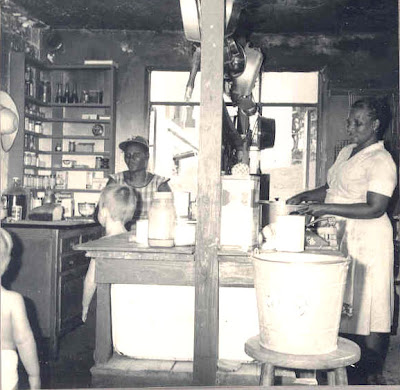 At breakfast Grammy had a charcoal pot set up to the left of her chair. The coals were always at a perfect glow. Those who wanted toast put in their requests to her. She'd slice off a hunk of fresh bread, set on a cutting board to her right, and put it in a metal toaster that looked something like the one below. 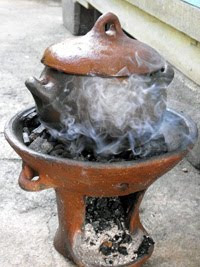 Lightly crisp or charred black, your toast was always exactly what you ordered. There was nothing better that her warm bread slathered with seagrape jelly and washed down with a glass of fresh squeezed orange juice. 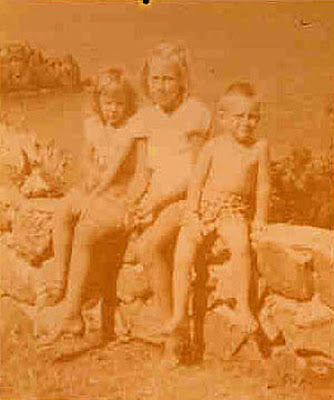 It's blurry, but this is me, my sister Erva and cousin Rafe on the stone wall outside the North Terrace. It must have been taken soon after we arrived. We are all so small and I look like I did when I was five.

We're all barefoot and squinting into the early morning sun.

I feel like I can almost remember when this picture was taken. I can feel the sun on my face, feel myself squirming. It looks like Erva has reached over to keep me from moving and that I've got my hand on her arm, trying to push it away.
More about Truck Bay next Monday.
Posted by Bish Denham at 12:00 AM