I don't use this blog to be political. But in the wake of Charlottesville, I have a story to tell. And this is without a doubt, the longest post I've ever written

Prolog
I grew up in a white minority in the . In 1955, my sister and I were the first (and only) white kids at the public school on . I was one of six white kids in my high school graduating class. While I was in the islands last month eight of us were able to get together for dinner. 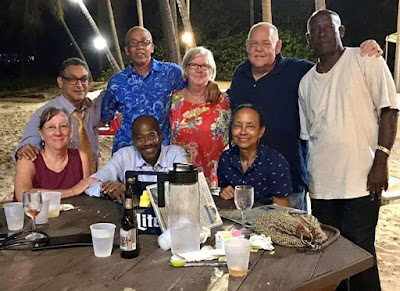 We are a beautiful rainbow.


The older I get the more grateful I am that I was raised in the and that my family has been in the area over 100 years. My sister still lives on and I have cousins who live on , , and . We are a multi-racial family.

Scene II
There was a most gorgeous sunset as we flew across the ocean and traveled up the coast. The massive clouds were painted golden-yellow with streaks of orange and red while rays of sunlight shot upwards from behind the clouds, a giant fan of light.

Scene III
Coming into , off to the southwest, a huge thunder storm was in progress. The clouds were lit up by massive flashes of lighting. It was better than fireworks at .

Act II
Scene I
Once on the ground in I asked a lady at the gate what I had to do next and was politely told where I had to go and to whom I had to speak. I followed her directions and secured my next day's boarding pass and a voucher for a hotel room and was told how to find the shuttle that would take me to the hotel. "Don't be afraid to ask anyone for help," the lady told me. On the way there, just to make sure, I did ask help from a young woman who walked me to where I needed to go.

Scene II
The shuttle driver took my bag and I, along with others, were loaded into a small bus and taken to the hotel. A handsome young man with a beautiful smile whizzed back and forth behind the counter in a wheel chair, checked us in and give us our room keys. I asked when I needed to get myself to the airport to catch my morning flight. He suggested 6 AM "To be on the safe side. The shuttle leaves every 15 minutes so if you're downstairs by 5:30/quarter to 6 you'll be fine." I was given a large comfortable room and though I had only 5 hours of sleep, it was a good sleep.

Scene III
I left a tip on the bed for the maid and went to drop off the key. The same young man who’d checked me in whizzed out from a side room to greet me with his beautiful smile. “You’re still here?” I asked. He laughed. “I think live here sometimes!” By 5:30 I was waiting for the shuttle to take me to the airport. A few others were waiting as well. A cheery older gentleman soon showed up, greeted us all and loaded our bags. Inside the shuttle soft, smooth jazz was playing.

Act III
Scene I
I had a precheck boarding pass so I got to avoid the long lines through security. Even so, my carry-on was pulled aside after being x-rayed. An older man was training a young man. They had spotted my baggy of sand. Even though they knew it was sand, the older man question the young man on what the procedure was when encountering something like that. The young man politely asked me to refrain from putting my hands anywhere near my bag. He removed the baggy, opened it, tested it and, finding it to be benign, returned it to where he gotten it. He apologized for the inconvenience. I told him I was happy to help with his training. I was then told how to get to my gate.

Scene II
It was, by this time, barely 6 AM. Walking to my gate I stopped at a restaurant, thinking to have breakfast and was told they wouldn't be open until 6:30. I continued on to my gate and outside through the large plate glass windows a brilliant, golden sunrise blazed in the sky. I felt calm and peaceful about everything. Life was good, my journey uneventful despite the delay, and people had been friendly and helpful.

Scene III
There was no one else at the gate when I sat down to wait for the restaurant to open. I didn't think about where I sat, I simply picked a seat. And there, hanging from the ceiling in front of me was a TV screen. Blaring from the screen were horrible images of hate with people screaming horrible words of hate and bigotry. I'd seen some images on facebook, but I hadn't seen any "news" as I'd pretty much been without TV for a month. Something inside me broke. In a flash, tears welled up in my eyes and I began to sob. I couldn't control it. I happen to have a napkin and pressed it to my eyes trying to staunch the flow. But they wouldn't stop coming. How could there be such people? How could they believe as they believed? How could they say such things? Where was the compassion for our fellow humans? How could this be happening in ? My heart was breaking and my soul being torn. In Bob Dylan's words, "Insanity is smashin' up against my soul."

Act IV
Scene I
So there I was, quietly sobbing into a napkin, trying not to cry out loud and make a scene when, from across the other side of the terminal, a woman approached. She stopped about 10 or 15 feel away from me and asked, "Ma'am, are you okay?" I looked up at her and without hesitation said, "No." Pointing at the TV I said through tears, "I don't understand it. It's breaking my heart, my soul is aching. I can't believe this is happening." And so the conversation began. We talked for a good half-hour, about life and how "those people" on the TV were a small minority making a lot a noise. That most of us, and she indicated me, the people working at the airport and the travelers, were just trying to live their lives in peace. She told me she not only worked full time for the airline, but was a nurse and owned a business, that her own family was multi-racial and that "those people" weren't worthy of the ground they walked on.

Did I mention she was a black lady? I told her I'd grown up in the , in a white minority. That it was a multi-racial, multi-cultural, multi-ethnic environment that, for the most part, was and is, extraordinarily tolerant and accepting of diversity and that I couldn't wrap my head around the news. She told me a story of how, on the day Trump was elected, a white man felt emboldened to be rude and called her a black fat-assed bitch. This, to an attractive slender woman in her late 30s, early 40s, with long braids pulled together that hung down to her waist. In response to him she looked around and asked the man who he was speaking to? And he said he was talking to her. She then asked what gave him the right to speak to her in that manner. And he said, "Now that Trump's been elected, it's called free speech." After he left she was so shaken she had to move to another department for a few days to calm down. I asked her how she handled it, how she dealt with the hatred. She told me every morning she gets up and thinks rainbows and puts rainbows around people. We talked about so much. Like how she thought we'd already been through this and it was like going backwards in time. How I'd lived through the 60s and the Civil Rights Movement and the riots and it was like going back in time. But finally the moment came when she had to get back to work. I thanked her for talking with me. “I would do the same for anyone I saw in distress.” We hugged, and held each other for several long seconds. I wished her a most blessed day and year and watched her walk away, my life forever changed. As I told my sister, I will not be tolerant of intolerance. (An oxymora for sure.) I know in my heart, if I see or hear intolerance within my sphere of existence that I will not be able to keep my mouth shut that I will have to speak up and defend what is right. Nazi salutes and intolerance towards human beings different from ourselves is WRONG, PERIOD.

Epilogue
Did I tell you that EVERY SINGLE PERSON I dealt with, from the lady in the airport to the flight attendant who greeted me as I boarded the plane to , was black? And EVERY SINGLE ONE OF THEM, was kind, courteous, helpful, and friendly.

That is the Real America.

Pictures of diversity from other class reunions.
The smiles on our faces are genuine. We always have a blast when we get together, picking up where we left off, as if we'd been separated only a few days rather than years. 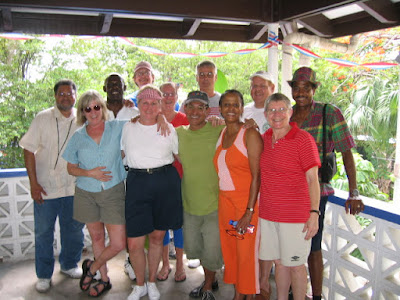 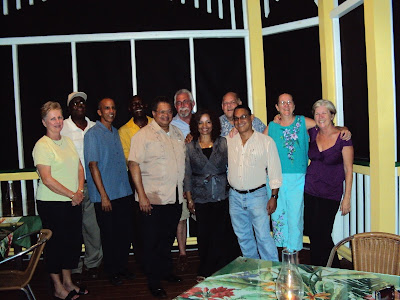 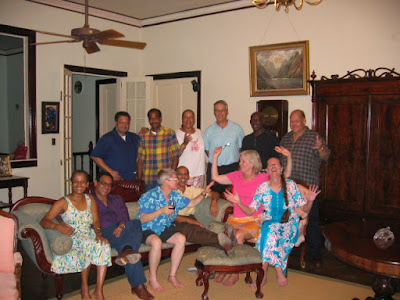 PS: Since writing and posting this blog I have written my first letter to our local newspaper in response to a letter I read that I couldn't "tolerate" going unchallenged. It was published in the Sunday paper, my first published Letter to the Editor.
Posted by Bish Denham at 4:00 AM

Email ThisBlogThis!Share to TwitterShare to FacebookShare to Pinterest
Labels: Being Thankful, Charlottesville, Diversity