Titles to Write By, Being Thankful 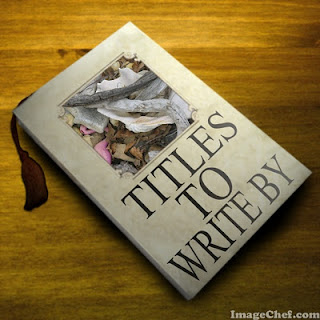 
For no particular reason,
today's word is:
Butterfly


Actually, I do have a reason for choosing butterfly. Last week conditions were just right for millions of American snouts (and some yellow and white ones others too) to come out in force. At times they were so thick as they flew close to the ground that they looked like leaves blowing in the wind. As of Sunday, they were still flying through.

Some of us have been driving slower in an effort to prevent the darlings from committing suicide on our windshields and grills.

This is the third time I've seen an invasion of butterflies.

Here's what I've learned:
Apparently a percentage of the larva can stay in state of suspended animation for many years, even decades, until conditions are right. It's called a diapause.

Now, on to titles.

Butterfly and Bee: A Love Story
The Butterfly Dragon, or, The Dragon Butterfly (that's for you, Lee McKenzie)
The Zebra Butterfly
Butterflies Rule!
To Be Part of the Kaleidoscope: The Autobiography of a Butterfly


***
Because the word butterfly appears I offer up  Little Wing by Jimi Hendrix. The lyrics are so beautiful.
jimi hendrix- little wing lyricss from kmkm on Vimeo.

Well she's walking through the clouds
With a circus mind
That's running wild
Butterflies and zebras and moonbeams
And fairy tales,

That's all she ever thinks about

Running with the wind

It's alright, she says
It's alright
Take anything you want from me
Anything

Being Thankful
Today I'm thankful for butterflies.
Tiger swallowtail on Esperanza. (By the way, Esperanza means "hope" in Spanish.) 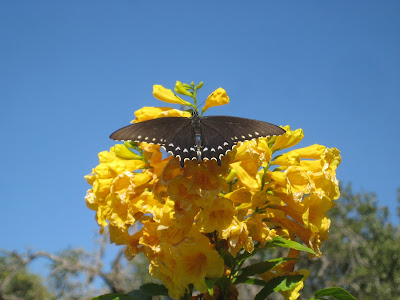 Deep into the nectar. 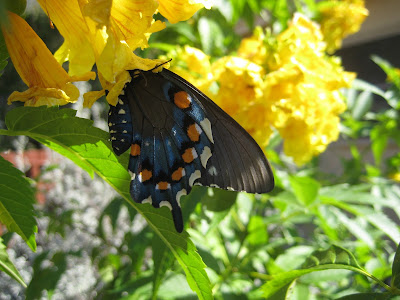 ***
What are you thankful for? Ever seen a kaleidoscope of butterflies? What would you call a swarm? Care to share a butterfly title in the comments? Do any of the ones I've given inspire an idea?
Posted by Bish Denham at 4:00 AM