It's been a long time since I've been given an award. This one comes to me via FarAwayEyes at FarAwaySeries. I don't know how long we've been reading each other's blogs, but it's been a while now. She lived in the Virgin Islands for a time and that connected us as well.

This award seems fitting after last week's post about meeting a famous person. You can read about my encounter with Scott McKenzie HERE. 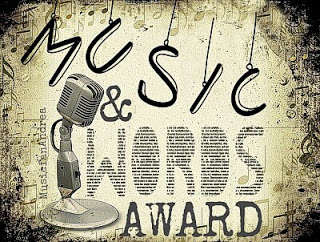 Here are the rules for this award:
I don't know how to do "Tags", so I'm leaving that out. And, since I know many of you may not  have the time, I won't be passing on this award . BUT, if you would like to do, you are more than welcome to copy and paste. I've included a lot of music here and I don't expect you listen to it all, but maybe pick something and enjoy.

What does music mean to you?
I have to admit, though I don't listen to music as much as I used to, it remains a core part of my being. There's music everywhere, in the wind through the trees, in bird song, in the shushing of waves lapping on the shore. Most times, when I'm on the computer or writing Pandora Radio is on and I'm listening to my Bill Evans Radio or Heart Meditations Radio.

This is an improvisational and unrehearsed melody Bill Evans recorded for his 1958 album called "Everbody Digs Bill Evans."

What is your first music related memory?
There was music going on in my home from my infancy. No matter where we lived my father always had a record player so I grew up hearing all kinds of jazz and classical music. No only that, he played trombone and was always in some kind of band. I know from the time I was six or seven my sister and I were singing standards like "Mood Indigo", "I've Got You Under My Skin",  "A Foggy Day"... too many to name. I love, love, love, Ella Fitzgerald.

But one of my earliest musical memory dates to when I was five and my mother took my sister and me to see the San Francisco Ballet preform The Nutcracker. Maria Tall Chief, the first Native American prima ballerina, played the Sugar Plum Fairy. Mom thought I'd fall asleep but according to her I sat on her lap the entire time, fascinated. When we got home Dad played his record of Tchaikovsky's suite and I danced around the house, copying what I had seen on stage. I also remember before I was five singing Three Little Fishies, (this version is by Spike Jones from 1953 but was originally recorded by Kay Kyser in 1939)   How Much is that Doggie in the Window, (recorded by Patti Page in 1952) and A Tisket, A Tasket, (recorded by Ella in 1939 it was either being played on the radio or my father had a copy.)

What was the first album you’ve purchased yourself?
Because I spent the first 14/15 years of my life listening to jazz and classical, I didn't care for rock and roll. I certainly didn't like Elvis or Paul Anka or any of the doo wop groups. And, though it may be sacrilege to say (write) it, I didn't like the Beatles when they first came out either. So, when I finally spent my hard earned money it was on Frank Sinatra's 1965 album, "September of My Years." I no longer have the album, and in revisiting some of the tunes on YouTube, it's so very flowery... It's my second album that set me on the road to discovery. Yup it was The Doors who turned me on to rock. Summer of 1967 with the song The Crystal Ship. That was quickly followed by The Beatles, All You Need is Love from The Magical Mystery Tour. I was hooked.

What was the latest music you purchased?
I recently got to see Sara Hickman and bought one of her albums. She played this song. It was much better live, and she's quite an accomplished guitar player and very humorous. She was also the Texas State Musician for 2010. Sandwiched, as she said, between Willie Nelson (2009) and Lyle Lovett (2011).

And then... hubby got me this album for Valentine's by James Darren because we enjoyed him as the character,Vic, on Star Trek: Deep Space Nine. It's currently in the CD player of the car.


Which song did you listen to last?
Other than what I'm currently listening to on Pandora? Which is Lush Life by John Hicks... I would have to say it was Strange Brew by Cream. On the Classic Vinyl channel of Sirius XM. Look at the hair and clothes!

I was enthralled with Ginger Baker's drumming. I remember getting Dad to listen to the song Toad. Then he said, "Listen to this. This is the man who introduced drums as a solo instrument." His solo is at about 1:45 and short and sweet. But you can hear why they called his drumming scary. And his kit, like Bakers, so small compared to what most drummers have now. Amazing what they were able to do.

And that's it for me with the Music and Words Award!

***
Being Thankful
Today I'm thankful for, what else, MUSIC!


What are you thankful for? Are any of these artists new to you? Familiar with any of them? Do you like jazz/rock/classical?
Posted by Bish Denham at 4:00 AM