For this challenge you will:
1.    Firstly share a paragraph from a novel, or an extract from a poem, or a photograph that stopped your heart with a spectacular setting etc.

2.    Describe how your chosen 'setting' spoke to you. Why did you like it?

I've chosen a photograph. This was a real sunset. I took the picture. Growing up in the Caribbean I've seen my fair share of beautiful and spectacular sunsets, but this one wins first place. Every time I see this picture I'm reminded of nature's incredible ability to create art and beauty. And always it is ever changing and ephemeral. Though I was able to capture this particular moment, it doesn't do it justice because we, the viewers, are unable to experience the expanse, the immensity, of sky and ocean. Here it has been framed, boxed in, limited. This picture is merely the essence of something that was much grander and ceased to exist long ago. 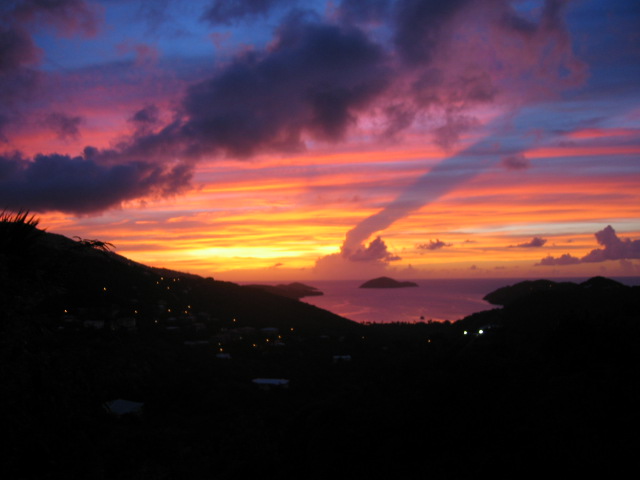 For my setting piece, here is an excerpt from a novel I've been working for far too long. It's one of those stories that's dear to my heart. To set the scene, picture eleven-year-old Sam and her best friend, Nick. Between them, their imaginations are inexhaustible. They are playing a game on a beach and have taken on the personas of the superheros, Mosquito Man and Tentacle Woman.

The Squalsh are as big as hundred pound dogs and look like a cross between a sea cucumber and a spiny sea urchin. They can throw their spines like javelins and are altogether repulsive. The only thing in the superheroes favor is that the monsters are as slow-moving as sloths, which makes it easy to stab them - avoiding the spines of course - with their spears.

“Tentacle! Behind you!” Sam whirls around. Three of the pukey green-black things are squalching towards her. She extends her eight tentacle arms towards the slow moving slugs and stabs at them with her spears. It only takes one well-placed jab to kill them.

The Squalsh fly around like popped balloons making a farting noise and expelling a stinking non-deadly gas. Tentacle and Mosquito dance around to avoid being smothered by the deflating stinking blobs of goo that are ejecting spines. It isn't long before the beach is littered with piles of oozing dead slugs. The monsters, realizing that today they cannot invade this beach, retreat into the sea. Mosquito zips around triumphant and Tentacle waves her arms in victory.

***
Hope you enjoyed today's Special Edition blog post. Are you taking part in this blog hop?