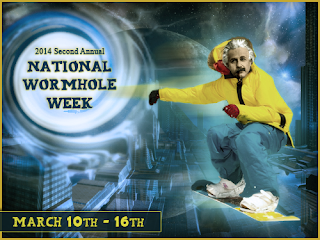 In this blogfest we are to name one thing where science advances mankind, and one where technology, with unforeseen consequences, will go too far and set mankind back. Example: De-Extinction, or bringing back extinction species through back breeding, genetic engineering, and cloning. Something where science takes a huge leap forward, but also backfires.  With all the breakthrough discoveries mankind is on the cusp of, are we playing God?

I think the work being done with DNA in discovering the causes and cures of genetic diseases is one of the greatest advancements in medicine that we are seeing happen in our lifetimes. It's a wonderful thing.

There are also things being done with genes that are quite interesting, like spider genes in goats. Their milk has a protein in it which, when processed, produces spider silk, the strongest fiber known to exist. If this kind of silk can be produced cheaply and plentifully its uses will be numerous.

However, I think there's a danger in taking genetic engineering too far, particularly in humans. Should we allow parents to pick and choose the genetic qualities they want in their children? How far should we let genetic manipulation go? The line between "good" and "dangerous" science seems hazy and gray to me. We could inadvertently create monsters if we aren't careful.

This week just happens to coincide with the release of Stephen Tremp's new book and third in his series, ESCALATION.

In Escalation, the final installment to Stephen Tremp’s Breakthrough Trilogy, a seemingly innocent discovery in Einstein-Rosen Bridges, or wormholes, becomes a Pandora’s Box—opening doors to other unexpected and unpredictable realities such as parallel universes, time/space travel, and an evil hitchhiker from another dimension.
Chase Manhattan has survived attempts on his life from numerous sources in his effort to destroy the technology. But he is far from safe. Now Chase and his comrades must not only break world renowned physicist Professor Nicholas Fischer out of prison a second time, but also smuggle him across hostile borders in Europe and the Middle East to prevent events threatening to spiral into World War III.

As a member of M.J.'s AZTechs, I'm here to remind you about the A to Z Challenge.

We are just FOUR WEEKS away from April 1st. Have you got a theme? Do you have any of your posts scheduled?

Come on people! JOIN THE FUN. Sign up and go insane with the rest of us.