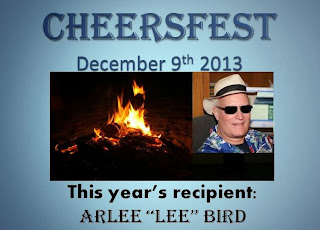 This year's Cheersfest is once again hosted by Mark Koopmans, Morgan Shamy, David Powers King, Stephen Tremp and The Ninja Captain himself.

In which we roast Lee by answering these four questions.

Why did Lee come up with the A-Z Challenge?
Because he didn't have anything better to do. You see, it was a slow day that Sunday....
If someone dreams about being a juggler, what does it mean?
It means you've got too much to do.
Is a post by Mr. Bird worth two in the bush?
Only if the bush is penetrable.

And in 100 words (give or take a few) write a bit of flash fiction using all these prompts. (Not including the title.)

There was once a bird juggler who wore a brown jacket. One day he got it into his birdbrain to try juggling cats. His friends told him he was nuts, but he didn't care. He liked the idea of the challenge. The real trick was catching three cats. The trouble was that whenever he grabbed one by its tail, he wound up being tossed instead of tossing. Life was hard on our brown jacketed juggling bird trying to juggling cats as a challenge. Eventually he give it up and moved to the blog-o-sphere where he took revenge on all cats by inventing The A to Z Challenge. 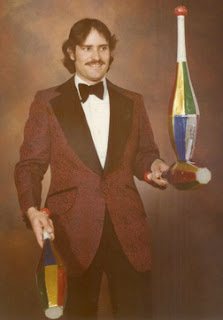 Two winners – chosen by Lee – will each win a prize:
·                     An autographed color photo of Arlee Bird appearing as the Court Wizard in the World of Fantasy Players. Also included in the first prize pack are an assortment of promotional materials from Lee’s show biz days with a personal letter and a brief history of his entertainment career.
·                     A personalized graphics design from Jeremy at Being Retro for the winner’s blog. (Jeremy will design a header, badge, button, banner, or whatever might appeal to the winner.)

Happy Cheersfest, Lee!
Posted by Bish Denham at 4:00 AM