Wow! Thanks, all of you who left a get-well comment. I truly appreciate it. It means a lot. I know it helped me feel better and heal faster.

My sweetie got this for me and now I pass it on to you. 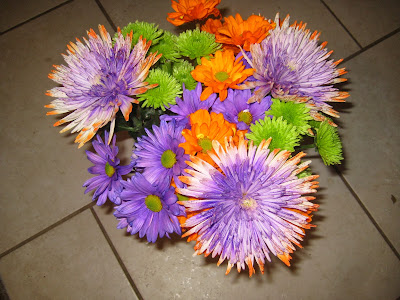 Look! It even has sprinkles... aka GLITTER!
. 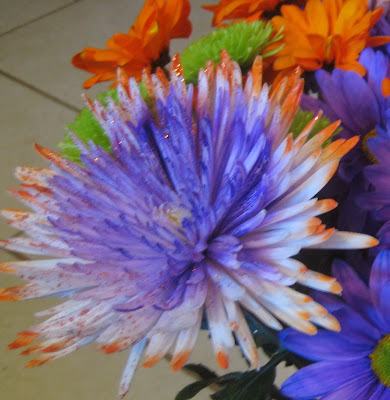 I had plans for the month of October because it is my ANNIVERSARY MONTH! Six years tomorrow, the 29th.


But even emergency surgery can't get in the way of celebrating!

So check it out. All you have to do is leave a comment and tell me which of the three selections you'd like. Unfortunately you have to live in the United States to participate.


Winners will be picked on Halloween, October 31st! 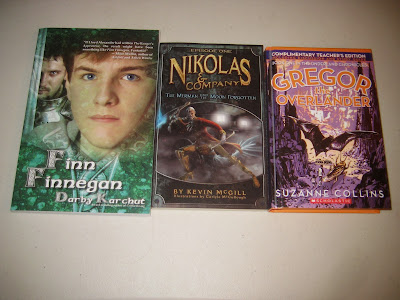 About Finn Finnegan: Finn (not bleedin' Finnegan) MacCullen is eager to begin his apprenticeship. He soon discovers the ups and downs of hunting monsters in a suburban neighborhood under the demanding tutelage of the Knight, Gideon Lir. Both master and apprentice are descendents of the Tuatha De Danaan, a magical race of warriors from Ireland. Scattered long ago to the four corners of the world, the De Danaan wage a two thousand year old clandestine battle with their ancient enemy, the AmandÃ¡n, a breed of goblin-like creatures.

About Nikolas & Company: The Merman and the Moon Forgotten - "Sometime in the near future…" Fourteen-year-old Nick lives in a time when one can zip from country to country in mach-speed hovercars, extend their life indefinitely through cerebral downloads, and have every whim taken care of by their ever faithful nannydrone.
Nick hates it. Aside from the refugee camps, overpopulation, and unchecked consumerism filling every city across the globe, Nick just doesn’t belong. That is when he hears the voice of a woman: “The Rones lie about their true intent. They enter the city of Huron at the peril of us all.” Shortly after, his slightly crazed grandfather reveals to him:“All you’ve ever heard about the Moon is a lie, my dear Nikolas. He was not always a mere satellite, a ghost wandering the stars. In an age before our own, Moon was our twin, and in him bore the whole of magical life. The cradle of this magical civilization was a fantastic metropolis filled with fire-breathing winged lions, volcano-born nymphs, automaton-legged mermaids, and so much magic you could smell it. We called this city Huron, and you, Nikolas, are her steward.”

About Gregor the Overlander: In the first novel by Suzanne Collins, young Gregor falls through a grate in the laundry room of his apartment building and hurtles into the dark Underland. This strange world is on the brink of war, and Gregor's arrival is no accident. A prophecy foretells that Gregor has a role to play in the Underland's uncertain future. Gregor wants no part of it -- until he realizes it's the only way to solve the mystery of his father's disappearance. Gregor embarks on a dangerous adventure that will change both him and the Underland forever. 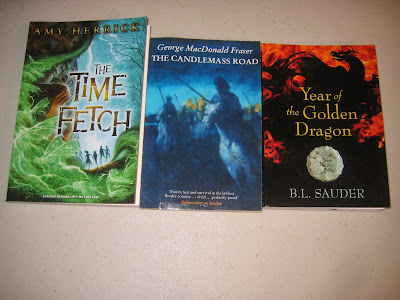 About The Time Fetch (this is an ARC): Edward picks up what he thinks is a rock. He doesn’t know it is a sleeping Time Fetch—and touching it will release its foragers too soon and alter the entire fabric of time and space. Soon the bell rings to end class just as it has begun. Buses race down streets, too far behind schedule to stop for passengers. Buildings and sidewalks begin to disappear as the whole fabric of the universe starts to unravel. To try to stop the foragers, Edward must depend on the help of his classmates Feenix, Danton, and Brigit—whether he likes it or not. They all have touched the Fetch, and it has drawn them together in a strange and thrilling adventure. The boundaries between worlds and dimensions are blurred, and places and creatures on the other side are much like the ones they’ve always known—but slightly twisted, a little darker, and much more dangerous.

About The Candlemass Road: Young Lady Margaret Dacre was brought up in the genteel fashion at the court of Queen Elizabeth I. When her father is murdered, she inherits his lands in the English West March and is plunged into a world where violence and raiding are commonplace. Fraser’s characters are, as always, richly developed through vivid descriptions and witty dialogues. His novel is true to the spirit of the Anglo-Scottish frontier feud.

About The Year of the Golden Dragon: Hong Mei and her single mother have had to move from town to town in modern China - as soon as townsfolk get suspicious that her mother's magical healing powers are, in fact, truly magical, they move on, usually in the middle of the night. But Hong Mei has started getting emails from someone named Madam Ching, who claims to have information on her long-missing father.

Ryan and Alex are Chinese-Canadian brothers who have lived with their aunt and uncle since their parents died in a mysterious fire. They are just going to visit relatives in Hong Kong as far as they know, just as the New Year's celebrations begin for the Chinese Year of the Golden Dragon.
What they are about to discover, as they magically connect with Hong Mei, is that there is a link between the fire that killed their parents and Madam Ching, between the ancient jade pendants they all wear and the Chinese myth of the Black Dragon. And why all these strange things start happening on the eve of the Year of the Golden Dragon.

East and West, ancient and modern, the mystical and practical, all collide as the trio races against time from Hong Kong to Beijing and finally to the famous Imperial tomb of Xian, where they meet their fate and discover what they are truly made of. 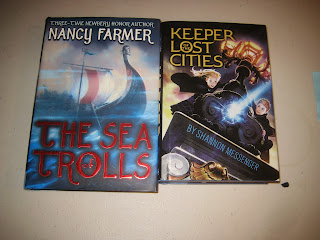 About The Sea of Trolls: Jack was eleven when the berserkers loomed out of the fog and nabbed him. "It seems that things are stirring across the water," the Bard had warned. "Ships are being built, swords are being forged."
"Is that bad?" Jack had asked, for his Saxon village had never before seen berserkers. "Of course. People don't make ships and swords unless they intend to use them." The year is A.D. 793. In the next months, Jack and his little sister, Lucy, are enslaved by Olaf One-Brow and his fierce young shipmate, Thorgil. With a crow named Bold Heart for mysterious company, they are swept up into an adventure-quest in the spirit of The Lord of the Rings.

About Keeper of the Lost Cities: Twelve-year-old Sophie has never quite fit into her life. She’s skipped multiple grades and doesn’t really connect with the older kids at school, but she’s not comfortable with her family, either. The reason? Sophie’s a Telepath, someone who can read minds. No one knows her secret—at least, that’s what she thinks…
But the day Sophie meets Fitz, a mysterious (and adorable) boy, she learns she’s not alone. He’s a Telepath too, and it turns out the reason she has never felt at home is that, well…she isn’t. Fitz opens Sophie’s eyes to a shocking truth, and she is forced to leave behind her family for a new life in a place that is vastly different from what she has ever known.But Sophie still has secrets, and they’re buried deep in her memory for good reason: The answers are dangerous and in high-demand. What is her true identity, and why was she hidden among humans? The truth could mean life or death—and time is running out.

Now it's up to you to celebrate with me. Just tell me which group of books you'd like. Will it be Group Number One? Group Number Two? or Group Number Three?
Posted by Bish Denham at 4:00 AM