Recently my sister, Erva, went over to Hassel Island with her boyfriend, D. and a ten year old boy, R. What follows is a slightly abbreviated account of a true story.

It's been at least 50 years since I set foot on Hassel Island and much has changed. The old buildings, while overgrown, are still visible.

I particularly wanted to see the Hassel family graveyard. There is a trail from the area of the old Creque marine railway that wanders along the shore and past the old coaling station. It then goes up the hill to the other side of the ridge to the 1801 British Officer quarters. Just behind that is the family graveyard. (You can read more about the island's fascinating history HERE)


R. and I were about a third of the way up the hill, at least a hundred yards away from the shore when I saw something unusual on the trail.  At first I thought it was a blossom that had fallen from one of the trees, but I stopped because that didn't quite register.

I bent down to pick it up - it was alive and gasping - a baby porcupine puffer fish.  It was about an inch and a half long.  I put it into R.'s hands and he ran with it down the trail to the shoreline to get it into the water again.

How did it get there?  Probably a bird - a tern, seagull or frigate - scooped it up from the shallow water, then the poor little fish puffed up exposing its spines and the bird dropped it.

When I got to the shore, R. was tending it in the shallow water, but it was not responding well. As fate would have it, right there, was an intact quart sized Tupperware tub that had washed up. I filled it with seawater and we placed the poor little struggling fish in the tub. As soon as we got back to the old railway, we refilled it with fresh seawater.

By this time, the little fish was fully puffed up with water...the right thing as it had been so dehydrated.  It's little  tail and fins were dry and sticking to his little body, but they were beginning to loosen from the sides of his body. Eventually the little fish was no longer all puffed up and back to normal size. All his little fins and tail were functioning correctly and he was even spitting water out of his little mouth.

The next step in the adventure was to call some children, who live on a sailboat in the bay, to come see the fish and help us with a ceremony to return him to the sea.

We included a fresh Maho tree blossom to go with him and saw him swimming happily away. 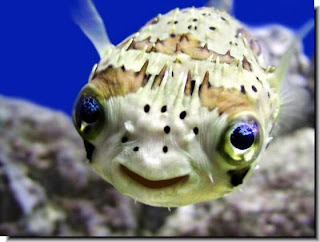 Have you ever rescued a wild animal from certain death?
Posted by Bish Denham at 4:00 AM