...George Harrison. Well, I'd LOVE to play guitar like he did. 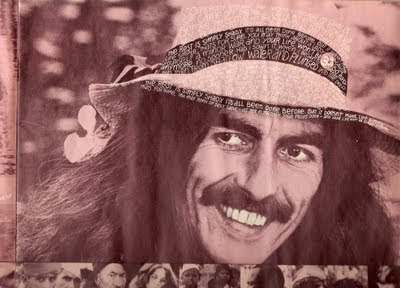 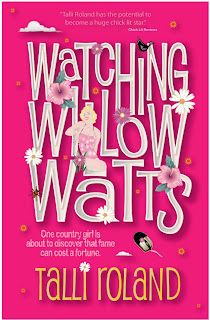 About Watching Willow Watts: For Willow Watts, life has settled into a predictably dull routine: days behind the counter at her father's antique shop and nights watching TV,  as the pension-aged residents of Britain's Ugliest village bed down for yet another early night. But everything changes when a YouTube video of willow's epically embarrassing Marilyn Monroe impersonation gets millions of hits after a viewer spots Marilyn's ghostly image in a frame.

Instantly, Willow's town is overrun with fans flocking to see the 'new Marilyn'. Egged on by the villagers -- whose shops and businesses are cashing in -- Willow embraces her new identity, dying her hair platinum and ramming herself full of cakes to achieve Marilyn's legendary curves.

But when a former flame returns seeking the old Willow, Willow must decide: can she risk her stardom and her village's newfound fortune on love, or is being Marilyn her ticket to happiness?

You can find Talli's book at:
Amazon UK  and at
Amazon  Go on you know you want a copy!
And hop around, click HERE to check who the rest of us wish we could be!


Even when I didn't like The Beatles (a period of time that didn't last very long) I liked George. Though he was called "The Quiet Beatle," I believe he had the quickest wit, the sliest sense of humor. His songs, "Taxman" and "Piggies," attest to his ability to employ sarcasm. He didn't have to play a million notes and sound like he was on speed to get his point across. I love his slide work which sounds faintly of sitar, an instrument he discovered in India. It's extremely difficult to learn to play, yet he took up the challenge and was the first to bring it's sound into rock music. He had a few other firsts as well: first Beatle to have a solo album (1968) writing the soundtrack for the movie "Wonderwall," first rock musician to hold a benefit concert known as, "The Concert for Bangladesh," first solo Beatle to tour North America.

I also admire how he found a spiritual faith that he sustained through-out his life and expressed without apology through his music.

I swore if I ever got the chance to see any former Beatle in concert I'd go.

In 1974 I happened to be living with my folks in northern California when I learned that George Harrison was going to be playing at the Oakland Coliseum promoting his new album Dark Horse. Luckily I had a cousin living in the Bay area who not only got me a ticket, but let me stay with her. She even dropped me off and picked me up after the concert. She and her boyfriend couldn't afford to go...the tickets cost too much, a whopping $8 or $9! And for that we got not only George, but Ravi Shankar, Billy Preston, Tom Scott and the L. A. Express and a host of other musicians and singers.

This is a the cover of the concert booklet. Yes, I still have it. The picture of him above is also from the booklet. 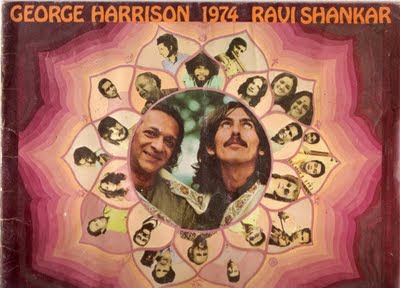 I have never been more excited and terrified at the same time as I was walking into that stadium by myself. I'd been to other concerts but none as large as that one. There I was one of about 20,000 people. I have no idea how I found my seat, which was perched up in the clouds. I even brought my father's bird binoculars so I could maybe get a closer glimpse of my one and only rock idol.

When he came out on stage and started to play, I wasn't prepared for my reaction. Up until that moment I hadn't understood why people (mostly females I suspect) scream at concerts. But I got it. Something totally primal and  filled with love came bubbling up out of me and burst from my throat and mouth being expressed in the only possible way it could be expressed. A scream. It so startled me I clapped my hand over my mouth and looked around embarrassed. A young man sitting next to me, yelled into my ear, "Don't worry, I screamed too!" And we laughed and screamed with delight, just as most everyone else was doing.

We were a good audience. We didn't scream through the entire concert, just at that first initial rush of energy. Then we settled down to listen. Ahhhh. I'll not soon forget. He was hoarse from having done so many concerts, but did I care? Hell no.

Of all the things I've done in my life, seeing George Harrison in concert is in the top five "Best Of" list.

These two videos are taken from the 1974 tour when he stopped in Fort Worth, Texas. The first one, "Hari's on Tour,"  highlights his slide work and his exuberance. The second is the song "Dark Horse." The film and audio aren't the best, but do I care? Hell no.

I'm a dark horse
Running on a dark race course
I'm a blue moon
Since I stepped from out of the womb
I've been a cool jerk
Looking for the source
I'm a dark horse.

You thought you had got me in your grip
Baby looks like you was not so smart
And I became too slippery for you
But let me say that was nothing new.

I'm a dark horse
Running on a dark race course
I'm a blue moon
Since I stepped from out of the womb
I've been a cool jerk
Cooking at the source
I'm a dark horse.
Posted by Bish Denham at 12:00 AM