Before and After - Cruz Bay

This is a picture of my grandmother, Erva Boulon, riding her horse into Cruz Bay. It was taken in 1945. Almost every day, she rode the twisting, turning two miles from her guest house at Trunk Bay, to pick up the mail and do whatever shopping she could. 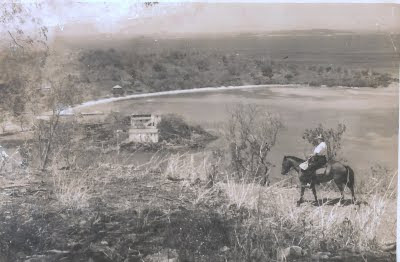 The large building on the near point of land is called The Battery. It was built by the Danes and was a kind of small fort. There are protecting walls and places for cannon. And...there is a dungeon. If you look closely you can see there are actually two buildings. The long one in front of the larger two story building (with stairs and balcony) was the post office. Everyone picked up their mail there. WE had our own cardboard box on the floor into which all our mail was tossed.
The far point of land that sweeps away to the right is called Gallows Point. I don't know if anyone was ever actually hanged there. However, my best friend and I certainly had fun pretending the place was haunted by blood thirsty pirates who'd been hung from the old genip tree. Sometime in the early 1950s Duke Ellington and his wife Kay built several cottages there and a had bar where locals met after work. Duke was a mystery writer. You can read a little about him here. Duke was the older brother of Steve, of Steve and Nora fame who helped us out during the drought of 1960-61.
This picture was taken at least six years ago. The seven tiny cottages at Gallows Point are long gone, replaced with resort condos. That large ugly gouge in the hillside has been filled with an equally large and ugly condominium and/or apartment complex, I'm not sure which. The only thing that has remained the same is The Battery, the ocean and the sky. 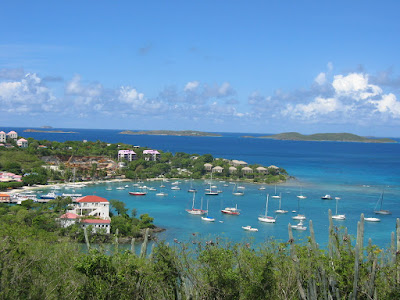 Nothing stays the same, but sometimes I wish things wouldn't change so drastically. Are you facing a change you'd rather not deal with, but must?
Posted by Bish Denham at 12:00 AM