There are many rocks that poke their noses out of the ocean, hiding their massive bodies beneath the waves. They have names like The Brothers, Carvel Rock, King's Rock, and The Indians.

Some rocks look kind of like hardened scabs on the the hillside.

If you sit on the left side of the plane when you fly into St. Thomas, you might see is this cliff cave. 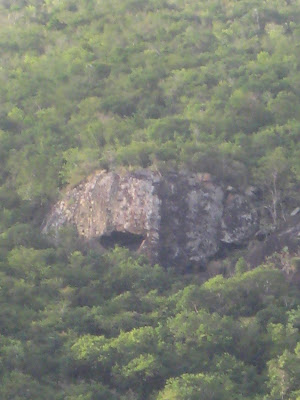 This is what it looks like from Brewer's Bay where I took the picture. 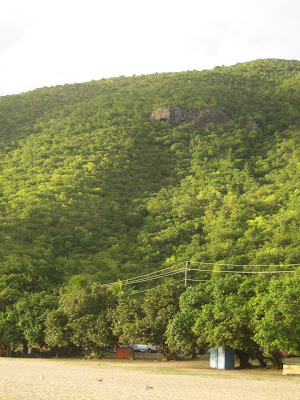 It's really quite a massive out-cropping of rock. I believe it and the hillside are owned by the University of the Virgin Islands (but don't quote me on that.) There are nature trails that go up to it, though I have never been. Perhaps the next time I'm down there my sister and I will go. It's amazing how many places there are to explore within 39 to 40 square miles. It's amazing how many people grow up within that space and never get to the other side of the island. It's true, I'm not making that up.
If you sit on the right side of the plane as you fly in, you might catch sight of Sail Rock. 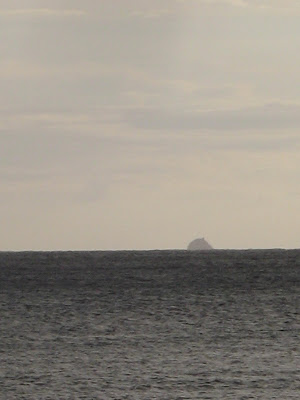 If I see it when I fly in, I get all goose-bumpy. It's my Statue of Liberty. It's the beacon that tells me I'm home. When I leave, I get all weepy, because it's the last glimpse of the Virgin Islands I will have until I return.
As you can sort of see from the picture ( it's several miles off the west end of St. Thomas) it's somewhat triangular in shape. Legend has it that during World War I the Germans fired on it thinking it was a U. S. navel ship. It's true the Germans were prowling the area, but whether or not they was actually fired on it I don't know.
What is also true is that the islands were an important mid-way point between the Old and New World from the time they were discovered by Columbus in 1493. The U. S. bought the islands from Denmark in 1917 to protect the Panama Canal from the Germans. Some of the old wooden barracks that were built at that time are still standing and in use.
The islands were also important during World War II. St. Thomas had a sub-base, a deep water harbor were submarines could dock. There were concrete bunkers, navel barracks, (some of them are still in use as well) and aircraft hangers (the University's gym is built around one.)
It's interesting that such small pieces of rock (I'm talking the islands themselves) have played so many major parts on the world's stage. Sail Rock being one of them.
More rocks tomorrow.
Posted by Bish Denham at 12:00 AM

Email ThisBlogThis!Share to TwitterShare to FacebookShare to Pinterest
Labels: rocks