I seem to be on a bug thing here. Care to join me?

The Virgin Islands may be paradise, but paradise comes with a cost. There are certain things one has to learn live with if one chooses to live in the tropics.
Because most homes are without screens on the windows and lack air conditioning, (well, that's relative, there are breezes so yes, it's "air conditioned") we live in a state of mutual acceptance with nature .

We live with termites, as mentioned in my last post. We also have a number of different kinds of ants. I love the crazy ants. They're black and when you disturb them they run around like crazy in a gazillion different directions. When they get on you they tickle something fierce. But they're harmless. The ones I hate are tiny, itty-bitty ants that have a bite worse than a fire ant.

They are just visible here, next to a regular sized spoon and a small piece of egg shell. 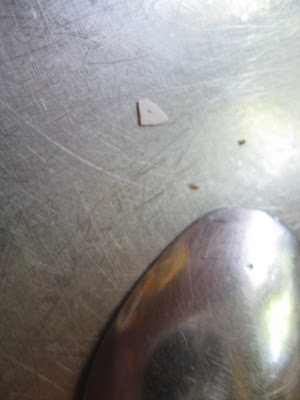 Here are some other creatures we live with.

Mosquitoes. There's no getting rid of them. But you can reduce their numbers if you put mosquito fish (which are a relative of the guppy) in your cistern where they eat mosquito larva and thus cut back on the number of dive bombers. Living with mosquitoes means living with the possibility of getting dengue fever. I've had it. They don't call it break-bone fever for nothing. Every single joint in my body ached.

Sandflies. Or no-see-ums. Small almost microscopic biting flies that come out particularly on the beach right at dusk when it gets still.

Wasps. These are Friday wasps. If you disturb their nest they buzz around, ask questions and if there's no serious danger that needs attacking, quickly settle back down. They're cool. It's like they know it's Friday so they're relaxed and happy. 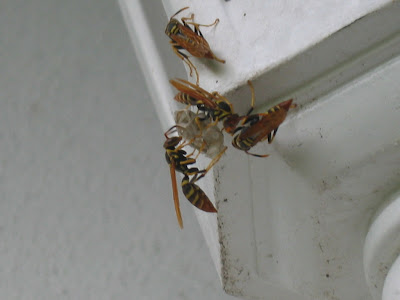 On the other hand there are Monday wasps which look the same but are bit larger and have an attitude. It's Monday, don't you know and they're pissed they have to go to work. If you disturb their nest they attack first and ask questions later

Mahogany birds. In Florida they are called palmetto bugs. I like the name mahogany bird better as it refers to their color which is truly a lovely brown mahogany besides which, they fly. They can grow to be damn near 3 inches long, so when they fly they really are rather bird-like. One time my sister and I caught one and put it in the freezer. A few days later we took it out and defrosted it. Sure enough, its legs began to wiggle so we smashed it. The beast that will survive the end of the world. 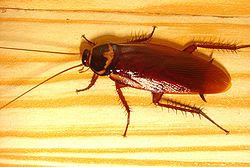 My grandmother used to say a cockroach is only as dirty as you kitchen and bathroom. She wasn't afraid to smash them with her bare hand either.


I'm not phobic about insects, although as a kid I was near phobic about spiders, but not any more. I am a strange graft of Friday wasp and a crazy ant.


What about you?Can you smash your fears or would you rather run from the room squealing? Are you a Friday or Monday wasp? A crazy ant or a tiny biter? Are any of your characters bug lovers or phobic about them? It can certainly add dimension.
Posted by Bish Denham at 12:00 AM

Email ThisBlogThis!Share to TwitterShare to FacebookShare to Pinterest
Labels: insects