Adventures Under the Mosquito Net - Part One

Angela at The Bookshelf Muse, just back from Africa, left a comment to my last post that mentioned mosquito nets. That got me to remembering.

As a child I liked sleeping under a mosquito net, not because it kept the mosquitoes off, but because I could pretend I was in a tent in the jungle, or on top of a mountain, or in the middle of a desert. Most of all I liked to pretend it was a seraglio, not that I knew that particular word at the time, but I had seen pictures of gauze draped rooms in my copy of 1001 Nights . 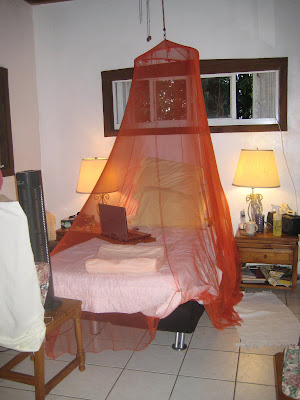 This is where I sleep when I'm in the islands. Doesn't it look like a seraglio to you? Some mosquito nets are rectangular, which is actually a better design as the sides are straight which makes for more room under the net. The rounds one just look romantic and are, in some places, used as a decorating feature. Form over function.
When we first moved to St. John we lived in a little cottage called The Shell. It was one of three rental cottage. The other two were called The Rock and The View.
The Shell was small. It only had one bedroom. My sister Erva and I slept in a fold-out double bed that was situated in a kind of open hall-way. There three walls, the fourth was open to the outside. The bed took up nearly the whole space leaving only a narrow walk-way between the bed and my parents bedroom. (In the morning it got folded up and pushed against the wall. The bed, not the walkway....) Every night after Mom read to us we got put to bed and the mosquito net (a rectangular one) was securely tucked under the mattress. Because I was little, I slept against the wall to prevent the likely hood of my falling out of bed, something I did from time to time. (Sometimes I'd wake up scared and disoriented not knowing where I was only to discover I was curled up under the covers at the foot of the bed.)
I've mentioned several times that I was, up until my late 20s very afraid of spiders. I can remember back to when I was maybe three or four years old when we were living in California being scared of daddy longlegs. Everyone, including Erva, knew of my fear.
One night after we had been tucked into bed and I was already dozing off, Erva said, "Oh, look Bish, there's a spider."
"Where, where?" I was already panicking.
"In the corner there." It was in the right corner at the foot of the bed, ON MY SIDE and INSIDE the mosquito net.
My reaction was so immediate and desperate. I screamed, pushed the covers off and trampled across Erva's chest on all fours ripping the mosquito net up as I went and tumbled to the floor. It was over in a few seconds. My screams brought Mom and Dad to investigate where they found me hollering on the floor and Erva with the wind knocked out of her.
It turned out to be a common harmless house spider which Dad caught with a jar and plate and released outside.
Erva was mad at me for trampling across her chest, but it was her own fault. She knew I was afraid of spiders.
Posted by Bish Denham at 12:00 AM

Email ThisBlogThis!Share to TwitterShare to FacebookShare to Pinterest
Labels: spiders