My father's mother, Sarah Eliza Miller, was born on this day in 1894, in Victoria, BC. Nana was the last of nine children. She's the baby in this family portrait. Her older sisters were totally embarrassed that their mother, pushing 50, was pregnant.
They are, standing l to r: Eugene, Tom, parents Eliza and James Miller. Sitting, l to r: Mabel, Sarah Eliza, Laura, Eva, Leland, Frank and James.
This is Nana at about 10 with her older sisters who were all grown up with families of their own. Some of her nieces and nephews were older than her. 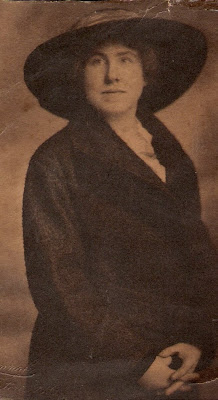 She was named after her grandmother, Sarah Haught Miller and her mother Eliza Vincent Miller. But she hated the name and eventually changed it to Vivian.
Nana was a talented musician, a concert pianist. What made her talent even more special is that she had very small hands. She couldn't span the scale on the key board between thumb and pinkie. Yet with lightening fast speed she hit notes an octave apart and you couldn't hear that they were actually being played separately. I think all the musical talent among the Denham cousins comes from her. And at least one of us, Vince Denham, has made it a profession.
Sarah Eliza married John J (no period) Denham and had three sons. My father John Stanford, was the oldest. A mere eleven months later the twins Emerson and Monroe were born. Those twins were, you won't believe it, nine pounds each! With three infants on her hands she told uu how she'd set them on the floor, cover their hands with molasses and give them a feather. They'd spend hours trying to get the feather off and licking their fingers.
When my father was about 10, John J abandoned his family and Nana was left to fend for herself. The boys hunted for food with a 22 rifle and she played in honky-tonks. Somehow they survived the Depression and she managed to raise three wonderfully intelligent, strong boys.
In 1942, she gave this picture to my father to carry with him while he was in the Navy.
There was a brief second marriage before she married the man I always thought of as my grandfather, August Braendlin. He was Swiss and so loved by us that my sister Erva Augusta is named after him.
Nana and Pa. 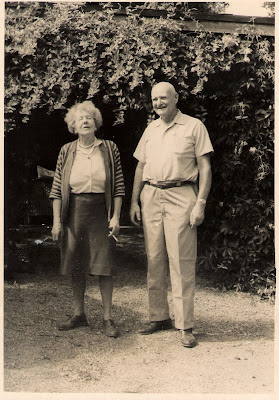 She cussed and smoked, was smart, tough, and independent. I didn't know her as well as I would have liked because we were in the islands and she was in California. Just the same I have some fond memories of her.

One time when we visited in 1970 I was looking for saltines in her kitchen. From the living room she was giving me very detailed instructions on where to find them.
"I found them somewhere else, Nana," I told her.
"I don't care where you found them," she replied. "I'm telling you where they are!"
A second or two later she started to snort and laugh. And we laughed with her.
Nana died in her sleep in 1976. She was 82 years old.
Posted by Bish Denham at 12:01 AM

Email ThisBlogThis!Share to TwitterShare to FacebookShare to Pinterest
Labels: Nana