Xebec is for Yacht

Xebec: Probably from the French chebec, from the Arabic word shabbak. Do you know what a xebec is? It's a 3-masted Mediterranean sailing ship with long overhanging bow and stern.

How in the world did I manage to bring these two words together?

I've mentioned in past posts that my parents were close personal friends of the Oppenheimers (as in Dr. Robert Oppenheimer and his wife Kitty.) They came to St. John every summer, with their daughter Tony, and stayed at their beach house at Hawksnest.

Among the people who came to St. John to stay and visit with the Oppenheimers was Dr. Robert Serber another physicist. Dr. Serber had a sailing yacht. Its name was...you guessed it, The Xebec.

One summer Dr. Serber arrived in the islands with a group of his students from Columbia University where he was teaching. While they were there he invited Tony, my sister Erva and I to go on a day sail up to Tortola and Virgin Gorda with him and the boys.Those young theoretical physicists were not your nerdy looking guys, they were hot. Naturally we jumped at the opportunity to be around some bare chested brainiacs.

The sail up through Sir Francis Drake Passage was perfect, as was the time we spent on Tortola and Virgin Gorda.

This is Drakes Passage. In some places it is barely a quarter of a mile across. On the right is St. John, on the left is Tortola. Looking like one long island in center distance is, right to left, Virgin Gorda, Peter Island and Norman Island. Drakes passage is named after the famous buccaneer and explorer Sir Francis Drake. He did indeed sail his fleet through these very same waters, which is why it's named after him. 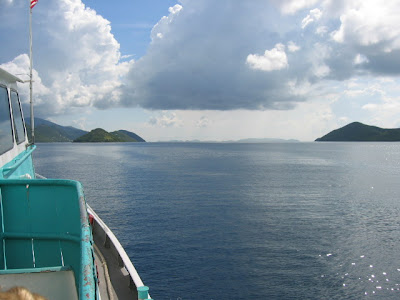 Squalls spring up out of nowhere in the summer. You can watch them form. A perfectly normal blue sky with great white cumulus clouds, like the one pictured above, can, in minutes, turn a dark brooding purple-gray. The wind picks up, calm water get suddenly choppy, then it starts to pour. 5 or 10 minutes later, it's all over. You can watch these squalls pass right by you, 1/2 a mile away or closer; a heavy curtain of rain "out there," dry as bone where you are standing. In fact I have seen it pour on one side of a building and not on the other. They aren't called scattered showers for nothing.

This is a small on. 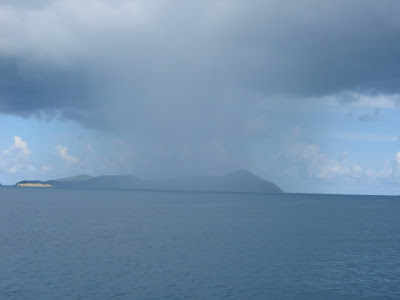 Anyway...as we were sailing back to St. John one such squall hit us. We saw it coming and knew it was going to be a good one. We also knew we couldn't out-sail it.

I may have grown up on the ocean but I am not a sailor. I barely know one sail or rope from another. Luckily I was with some people who did.

Before they could haul in the jib and reef the main sail that squall hit us BAM! There was a great deal of scrambling and loud snapping of sails and yelling to get that line and pull in that sail and everyone get over on the high side of the boat because we were tilted at such an angle that water was washing up on the deck and we needed to try to keep the boat from capsizing. And the rain was pouring down, and lightening dazzled our eyes, and thunder munched our ears, and we were in the narrowest part of the passage, and the wind and waves were shoving us towards those rocks.

I tell you it was one of the most terrifying and exhilarating moments of my life.

Correction: I've made a mistake. Since posting this I've learned from my sister the elephant that Dr. Serber's boat was NOT the Xebec (though there was a boat by that name) but the Undique, which in Latin means, from all parts, from every quarter, on all sides, all around, on every part, everywhere. My bad. But I could not let this large mistake go uncorrected. The sail on Dr. Serber's boat the Undique took place as described, I (just) had the name of the boat wrong. I hope I will be forgiven.
Posted by Bish Denham at 12:01 AM