Okay people I'm up to 98 Random Followers! When I hit 100 there will be a contest! (Even if it means interrupting the A to Z challenge.)

Nurture: Middle English from Middle French norriture, from Late Latin nurtritura meaning the act of nursing, from Latin nutritus the past participle of nutrire, meaning to suckle, nourish.

As children's writers we need to stay connected with our inner child, for it is from this place that our stories come. I think some cases of writer's block may stem from our adult world over-powering the little kid inside each of us. And as most kids will do when this happens, he/she pouts, goes to his/her room and won't speak to us. When this happens our inner child must be tempted to come out and play.

Have a water fight.
Blow big bubblegum bubbles.
Dance in the rain and play in the mud.
Have a screaming contest.
Play dress-up/make-believe.
Play hide and seek.
Jump rope.
Play jacks or marbles.
Run around crazy in the back yard yelling like a fool.
Spin around until you get dizzy and fall down.
Laugh at a really stupid joke.
Have a pillow fight.
Eat an entire meal with you hands (maybe even have a food fight.)
Stand behind a door and "scare" someone.
Roll around on the lawn like the dog does.

In other words have fun. Try to remember what it was like to be a kid when everything was new and you were seeing/experiencing it for the first time. There was wonder, magic in the world and you were at the center of all.

What are some other ways you can nurture your inner child?

And all of that leads wonderfully into...

Oz: And I'm not talking about the good doctor. The most commonly believed origin of the name for this, the first and only American fairyland, is that L. Frank Baum, while telling his four sons stories and needing a name for his magical land, looked over at a file cabinet and saw the letters O-Z. You can read all about Oz here, the official website.

I was first introduced to the Oz books by my mother who read them aloud to my sister and me. The tiny library on St. John may not have had many books, but the Oz books were there, jewels on the shelves.

Baum was a dreamer who failed at most everything he tried until he was encouraged by his mother-in-law to write down the stories he'd been telling to his sons and their friends. Like most writers he had trouble finding a publisher, but once he did...well the rest is history.

He was a prolific writer who wrote under several pseudonyms. He wrote a great deal more than the 14 Oz books. There were a total of 40 books in all written by various others authors like Ruth Plumly Thompson and John R. Neill, but I preferred those written by Baum himself.

He would probably be edited today from writing such things as, exclaimed the Ork scornfully, or, he answered gravely. But truly, I don't mind this style of writing at all.

I still love the illustrations by John R. Neill. I scanned these from the only Oz book I have, The Scarecrow of Oz.

The Scarecrow of Oz 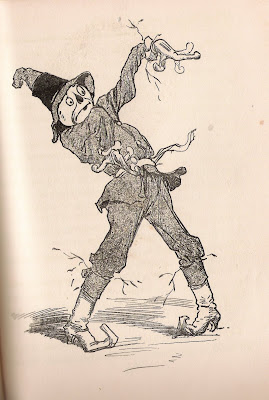 Ozma of Oz, Dorothy and her friend Betsy. 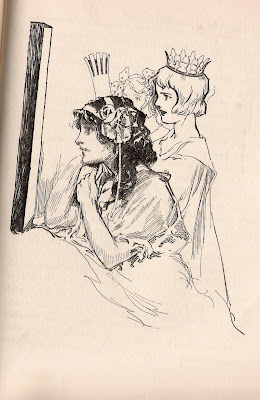 His boundless imagination should be an inspiration to us all.

One of my favorite characters is the Glass Cat from The Patchwork Girl of Oz. She was very beautiful, vain and self-centered.

"The cat was made of glass, so clear and transparent that you could see through it as easily as through a window. In the top of its head, however, was a mass of delicate pink balls which looked like jewels, and it had a heart made of a blood-red ruby. The eyes were two large emeralds, but aside from these colors all the rest of the animal was clear glass, and it had a spun- glass tail that was really beautiful."

At one point the Glass Cat (whose name was Bungle) says, "Three heads are better than two, and my pink brains are beautiful. You can see em work."

Can you name any other Oz characters? Do you have a favorite one?
What was the Tin Woodsman name?
What was the color of Dorothy's magic slippers?
Posted by Bish Denham at 12:01 AM

Email ThisBlogThis!Share to TwitterShare to FacebookShare to Pinterest
Labels: A to Z challenge, L. Frank Baum