My mother's mother was born on this day in 1895, in Ada, Ohio. Her name was Erva Love Hartwell. The middle name of Love was dropped when she got married, at which point she became known as Erva Hartwell Boulon.

At around the age of two or three, she was chosen to be the face for Mellin's Food, a brand of baby food. This is the original ad, not a copy. 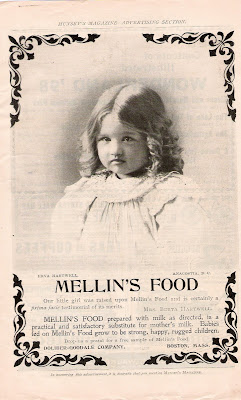 Here she is with her dolls when she was about six or seven. 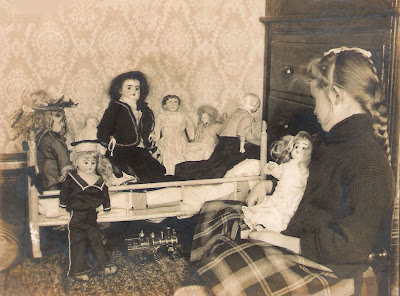 At around nine or so, she and her family moved to Key West, Florida because her father, Frank Hartwell, was a weatherman for the newly formed Federal Weather Bureau. The Bureau now bares the name of the National Oceanic and Atmospheric Administration. Below is Erva Love in Key West.
In 1909 Frank Hartwell was transfered to the weather station in Old San Juan, Puerto Rico. Erva Love was about 14. She graduated from Central High School in San Jaun. This beautiful building is now an art school.
Erva Love Hartwell at 19. 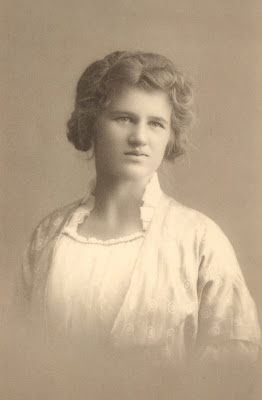 This is my favorite picture of her. Imagine how long her hair was when it was unbraided! I don't know how old she was when it was taken, but I estimate somewhere between 18 and 20.
She married Paul Alfred Boulon in Puerto Rico and had four children, my mother being the oldest.
In 1928 they bought Trunk Bay on St. John. In the years that followed the family build a summer home there. I'm not sure if that's her in this picture or our dear family friend Charlotte. 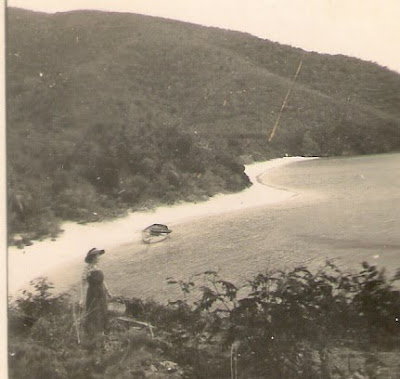 After World War II Grammy ran Trunk Bay as a guest house. She did it without electricity, cooking three meals a day for her guests. John Dos Passos, Dr. Robert Oppenheimer and his wife were among some of her more well-known guests. She gained the reputation for being a superior hostess and an excellent cook. Using local foods, she learned how to prepare them in ways that would please American taste buds. An article was written about her in the cooking section of the New York Times and she wrote a cook-book call My Island Kitchen. I loved having breakfast at her table because she would toast your bread on a charcoal pot set on a small table next to her chair. Below is a postcard of her kitchen. 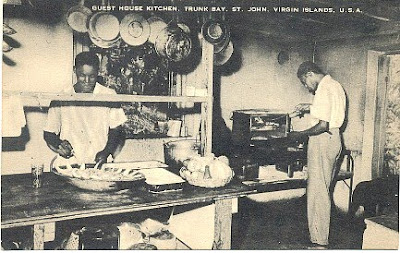 Here she is on horse-back about 1945 going into Cruz Bay to pick up the mail. There were no vehicles on the island at that time. Everyone rode or walked. 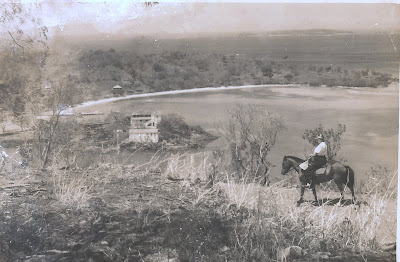 Grammy had a wonderfully loud, uninhibited cackling laugh. Her hair turned silver by the time she was in her forties. She wore it a single braid on the top of her head and dressed up her do with hibiscus. She liked large, avant-garde jewelry. She was a pioneer. 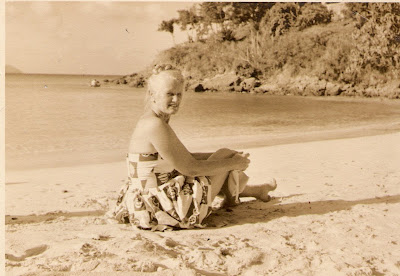 She died on December 27, 1972. We all still miss her.
Among those who share a birthday with her: Henry V, king of England. William Wilkie Collins, writer. Jose Ferrer, actor. Bill Graham, rock promoter (Fillmores East and West who stayed at our guest house at Lille Maho.) Elvis Presley and David Bowie.
Posted by Bish Denham at 12:01 AM