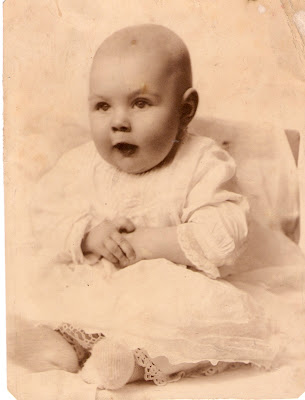 I love this picture of him. It was probably taken on his christening day. He’s ready to go. He’s ready to ask questions, to explore, to invent, to laugh and enjoy. The world is at his feet. Notice the tatting around the hem of his gown.
In honor of his birthday I would like to share memories of some of the gifts he gave me.
The first of course, is that he was one half of the duo who gave me life. That's really the biggest gift of all.
When I was quite young, under the age of five, Dad made a pull train out of blocks of wood and wooden thread spools. He painted it red and black. There was an engine, a coal car and a passenger car. I was small then, so I remember it as being rather large, at least a good three feet in total length. I can remember pulling it round behind me and making choo-choo noises.
I was, for a while, rather jealous that my sister had a bicycle and I didn't. Hers was brand new from the store. On my eighth birthday Dad presented me with a bike. He had, from three wrecked bikes scavenged parts and made me one. I'm ashamed to say I was disappointed it wasn't a store bought bike. But in my later years when I finally acquired a bit of wisdom I realized how precious the gift of that bike was. He had cleaned, worked out dents, sanded, polished and painted. He had built it with his own hands, with his time, and with his love.
On my tenth birthday I woke up to discover Dad had a surprise for me. After breakfast Dad, Mom, Erva and I trooped outside to my favorite tree. For the first time in my life I saw Dad climb a tree. We anxiously watched him shimmy out onto a branch (I'm sure Mom must have been quite nervous) and from that branch he hung a swing he had made from a sturdy board and rust proof chains. I already loved the tree, but having that swing in it made it even more special. The swing and the tree figure prominently in my life and impacted me in many subtle and varied ways.
In my teens I started buying and collecting records. I think I was probably 15 or 16 when Dad, for no particular reason, (I certainly don't remember it being my birthday or it being Christmas) presented me with a stereo record player that he had built. What I remember most about it were the speakers which he had built into the the case of his old portable Smith Corona typewriter. I could open up the case and separate the speakers as each of them had a good seven feet of wire connecting them to the record player.
The last gift my father gave was during the time he was dying of liver cancer. In his last weeks, despite the pain, he taught me how to face death straight on with dignity, grace and most importantly, with humor. 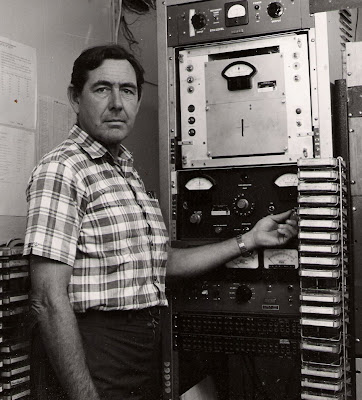 Thanks Dad...And Happy Birthday
Posted by Bish Denham at 5:22 AM

Email ThisBlogThis!Share to TwitterShare to FacebookShare to Pinterest
Labels: Dad