A Writer's Journey: Or How Writing Found Me

Writer buddy Joan over at Vicissitudes recently recounted the story of how she came to writing. She challenged her readers to tell their stories. I told her I’d take a stab at it.

There was a period of time when I was home schooled. My mother used the Calvert Course, which has now been in the business of home schooling for over a hundred years. I began the Calvert Course when I was around seven, so I probably started with 2nd grade. Mom and I had a daily routine of reading, writing and ‘rithmetic. I remember I had to memorize a lot of poems. I still know quite a few.

Mom was pleased with the course so we continued with it into the 3rd (and 4th) grade. A 3rd grade assignment was to write a little essay about my family. Up to that point I don’t think I’d written more than the occasional required paragraph. Mom later said she didn’t expect to get more than a page out of me. Writing was pretty much torture, both the physical act (my handwriting was HORRIBLE) and because I had such a hard time with spelling because I was (am) mildly dyslexic.

What a surprise when I pumped out three pages describing “My Family.” Despite the fact that the pages are long gone, one word from my essay has become part of the family vocabulary. In describing my sister and me I called us “the grils.” At least I was consistent; I called us grils throughout the whole piece. Erva and I have been known as “the grils” ever since.

The very first thing of mine to be published was a poem in my 1969 yearbook. Right after the title page is this two page spread picture of all us high schoolers standing around the parking lot. (Look at all those VW Bugs! And yes, that’s all of us, 9th through 12th grade, I went to a small school.)

In the bottom right corner is my poem. Ahem…. 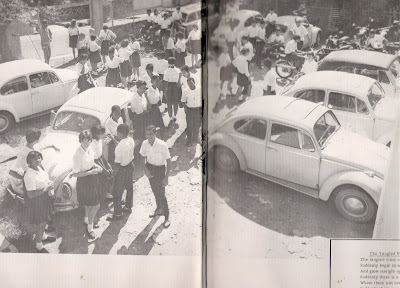 The Tangled Vines of Confusion

The tangled vines of confusion
Suddenly begin to separate
And grow straight up.
Suddenly there is a path before you
Where there was nothing –
Suddenly there is something from inside you
Encouraging you on – telling you
To take that hesitating step forward.

In my senior year I was the copy-editor for the yearbook and had two pieces published, which I won’t bore you with. In the late 70’s I wrote at least half a dozen articles for the local newspaper on St. John about growing up on St. John in the 1950’s.

In 1980 I started working at a home for abused and neglected kids. Three years later I was the assistant editor of the newsletter which went out six times a years to about 10,000 people across the U. S. and even to places like Australia and England. Over the next 18 or so years I wrote A LOT of articles for that newsletter. I also did all the layouts and took most of the pictures.

Inbetween all that I wrote for myself. I wrote journals, poems, short stories, and made many attempts to write novels. I have most of these horrible pieces, going all the way back to high school, in a four-door file cabnet. I'm running out of room.

Throughout it all, lying semi-dormant in my heart was the desire to write for children. So, when I finally “retired” from working at the home I decided to take the Institute of Children’s Literature writing course. It’s been about five years. I have had a little success; just enough to keep me plugging away at it.

Ultimately I give credit to Mom. From that first 3rd grade essay she sensed I might have a talent for writing. Through out my life she has gently and consistently encouraged me to keep at it. Mom was my first fan. My first book, whenever I finally get one accepted and it gets published will be dedicated to her. There was even a period in my life about 10 years ago when she somehow sensed that I wasn’t writing so she sent me the book, (which I highly recommend for anyone who feels "stuck") The Artist’s Way by Julia Cameron. She inscribed it, “For Bish, Follow the Way. Love, Mom.”

I took her advise. And I Follow the Way not because of the destination but because it's the journey that's important.