IWSG, an UPDATE, and BEING THANKFUL

This month's question is: As you look back on 2017, with all its successes/failures, if you could backtrack, what would you do differently?
I think I would have worked more diligently on the revising/editing of my novel during the first half of the year, which got set aside once the hurricanes hit the Virgin Islands and Puerto Rico. But I won't beat myself up about it. Some things are just more important, like being a link to family in the VI with the "outside" world.

For the time being, I've decided to post once a month on IWSG Wednesdays. It's one small way for me to keep in touch with this wonderful blogging community.

Post Hurricane Irma/Maria Update
It's been three months, today, since Irma slammed into the Virgin Islands. To say I've been on an emotional roller coaster ride is an understatement. It's been hard to wrap my head around 185 to 200 mph sustained wind with gusts of up to 250 mph. Nothing is quite like it was. The beach landscapes have completely changed with the loss of palm trees and ancient seagrape trees. 300 and 400 year-old trees are gone as are some 300+ year-old Danish buildings.  If that weren't enough, just two weeks later, the VI and Puerto Rico were smacked by Maria. What wasn't damaged by Irma was certainly tested by the terrible flooding. And Puerto Rico... There are still many people in the mountains who have not yet been reached... We will never know the true death toll.

I am reminded daily that NOTHING stays the same.

The most unsettling experience for me was watching a video taken on St. John a week or so after the horrendous flooding of Maria. As a kid I had the the whole island as my playground, I know this place. I know the roads, the landmarks, the trees... and yet, as I watched the video I couldn't tell where it was taken. I was completely disoriented and it was disconcerting to not recognize my beautiful island. The trees were blasted, not a leaf left anywhere. Barren twisted sticks stuck out of the hillsides looking for all the world like they had been consumed by massive fires or been flattened by bombs. Debris was everywhere piled 6 and 8 feet deep.

I confess, I've become a little obsessed wanting to find out what trees survived. The lignum vitae in Miss Meada's yard and the "plum" tree across the street, the tyre palms on Trunk Cay, the ancient tamarinds at East End and Lameshur, the mahoganys in Cruz Bay, the kapok at Caneel, the rain tree and bay trees at Cinnamon. On St. Thomas the baobabs and mamee apples , the tamarind at Nisky, the guavaberry tree, tyre palm and bay trees at my sister's house. I have wept as I learned the fate of each, whether it survived, was damaged, or is gone... Some I have yet to hear about.

I didn't realize how attached I was to the trees, how much each and every one meant to me. Landmarks in my life, landmarks pointing the way... "turn left at the tamarind and at the first flamboyant turn right." Landmarks imprinted on my soul, beating in my heart, swimming in my blood.

The Raintree at Cinnamon.
Scarred, but alive. 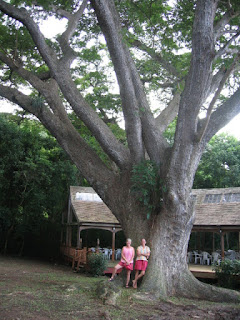 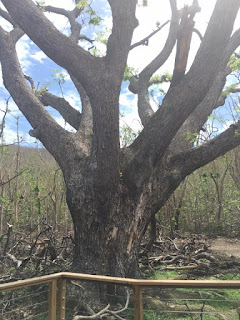 The lignum vitae in Miss Meada's yard
featured in my novel, The Bowl and the Stone
Lost limbs but has put on new leaves. 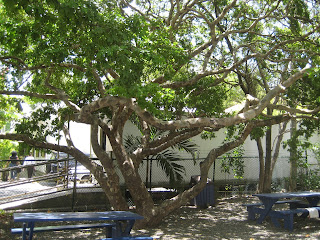 But some things will take generations to return to some semblance of what they were before.
(Pictures courtesy of Radha Speer, a friend of mine on St. John)
Before Irma, Gibney Beach, St. John. 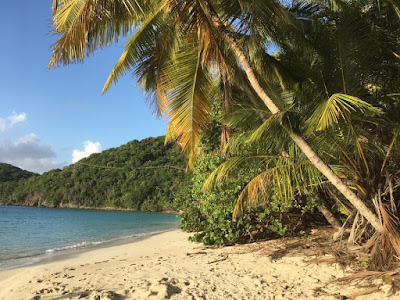 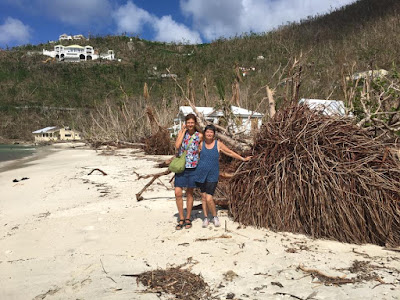 As my sister and I have, for the time being, lost our income source (like just about everyone else) I now have a part time job...

Being Thankful
Today I'm thankful that my family and friends in the Virgin Islands and Puerto Rico are safe, though day to day living is still difficult. I'm thankful that plant life is returning, that the hills are turning green, though the ecology may well be forever changed. I'm thankful that beaches are opening and the water is as beautiful as ever, though the shorelines have a totally different look. I'm thankful for the over 700 linemen who have come down from the states to replace power poles and string new line, though Puerto Rico is still struggling to get electricity to the city of San Juan. I'm thankful to the cruise lines who were the first to arrive with supplies and to help evacuate people and are now returning, a few ships at a time, bringing tourists, though their experience of the islands will be different than what it was pre-Irma. I'm thankful that my sister finally got her car out of her carport and is now able to drive herself around to run errands, though it took two months to clear the six foot wall of debris off her driveway and she is still without power. Daily I'm thankful for a myriad of small and large things and, as Christmas and the New Year approaches, will be thankful for many, many more.

And so, my new header picture is of a sunrise over St. John, taken from St. Thomas. Sunrise, because there is hope, because it is a new day. Because the people are VI STRONG, and like the Phoenix will rise again.

What are you thankful for?
Posted by Bish Denham at 4:00 AM

Email ThisBlogThis!Share to TwitterShare to FacebookShare to Pinterest
Labels: Being Thankful, IWSG, Update