Today is the 181st anniversary of the fall of the Alamo which occurred on March 6th 1836. 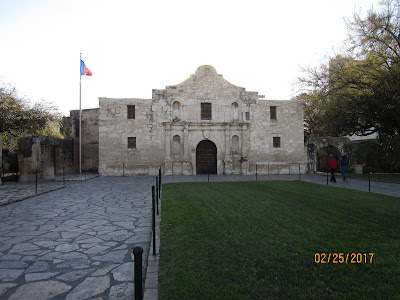 I have deep roots here in Texas. It is thought that my great-great grandfather may have been with a group of men who were responsible for destroying bridges across various rivers, preventing Santa Anna's army from retreating. I'm not sure how much of that is true, but he was an early settler.

James Thomas Miller, at the age of 15 or 16, arrived alone in Texas from Scotland, before 1836. (fact)He was given land grants  to land in present day Houston, grants that were only given to those people who participated in the Texas Revolution. He abandoned the land and, it is believed, headed north with a Major Bird and other men on a surveying expedition, ending up in the small outpost settlement of Dallas.  (fact)There he got new land grants and met the beautiful Sarah Haught.

(fact) James and Sarah were the second couple to be get a marriage licence in the settlement of Dallas. Sarah came from a large family who settled in Texas from somewhere in the east. (fact)A couple of her brothers ended up settling in the Hill Country near where I live.  (fact)Sarah and James's only surviving child, James Munro Miller, was born at Porter's Bluff, Texas in 1847. (fact)In 1850 they sold the land to make the long and dangerous journey to California. Because of debts they owed, a contract was written explaining that once the land was sold the money would be used to repay the debts. What is very interesting and unusual is that Sarah is included in the contract, in that it states she understands what will happen and agrees. She then signed it! (I have held the original grants and the contract in my hands and have copies.) Family stories say they traveled to the Gulf of Mexico, and got on a ship that took them to Cuba where they spent upwards of a year waiting for another ship to take them to the Panama. With young James Munro in tow (he would have been somewhere between three and five years old) the family walked across the Isthmus, surviving all kinds of dangers, from deadly snakes to deadly diseases. Once on the Pacific side they got on a ship and sailed to California. Sarah had three other children, but none of them survived.

(fact)When fortune in the goldfields was not to be found, Sarah and James moved to Victoria on Vancouver Island, British Columbia. (fact)Their son, James Munro and Eliza Vincent were married, probably in San Francisco as they owned and operated a bookbinding and printing business there. When a horse thief was hung from their second floor sign they decided the city was too rough a place to be raising a family and moved to Victoria. Eliza had nine children. My father's mother, Sarah Eliza being the youngest, was born when Eliza was a 42 years old, a scandalous age!
My great-great grandfather James Thomas died around 1864. In 1865 Sarah married Simeon Duck. In 1920 at the age of 91 Sarah, who drove sulkies quite late into her life, died from breast cancer. My father, born in 1916, had memories sitting on her lap.

I wish I had known their history years ago. I wish I were younger as I believe Sarah and James's story to be a romantic historical novel on a grand scale. To write it, though, would take a great deal of research, and I just don't have the time or energy...
***
This month I am honored, thrilled, and delighted to be the Featured Follower on C. Lee McKenzie's blog The Write Game. Each week she will be posting something about me and my books. At the end of the month some lucky person will win an ecopy of one of my books. The winner gets to choose between:
Anansi and Company

OR
The Bowl and the Stone

Hope to see you at Lee's!

***
Being Thankful
Today I'm thankful for the blogging community. For all the support I get, please know I'm open to supporting you as well. If you have a book to promote or a cover to reveal, I'd be happy to give you a shout out here on my blog, Facebook, and/or Twitter. Let me know!
***
What are you thankful for? How far back can you trace your ancestry? Are you interested in genealogy? Do you follow Lee?
Posted by Bish Denham at 4:00 AM