A Visit to Sacred Sites

Things happen for a reason. My Puerto Rican cousin Frances, was in San Antonio at a week-long psychology convention. She has a PhD in Educational Psychology and teaches at the University of Puerto Rico. 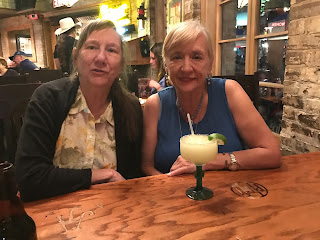 Frances (right) and me at a restaurant on the River Walk. Me in mid-sentence. You can tell we look kind of related. Same nose. :)

Hubby and I decided, almost at the last minute, to treat ourselves and spend a couple of days in the city. We haven't been to SA in a loooong time, like 15 maybe even 20 years. We decided to stay at the hotel where we spent our honeymoon 31 years ago, The Emily Morgan,which was built in 1924. Emily Morgan was taken captive by Santa Anna six weeks after the fall of the Alamo. It is believed she was "distracting" him when Sam Houston attacked which led to the Mexican army being defeated and Santa Anna being captured. (An aside here. Santa Anna made his way down to St. Thomas in the Virgin Islands and built a villa there -- which still bares his name. Great little history about it HERE.) 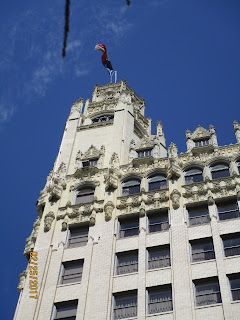 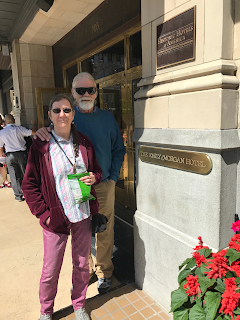 Hubby and me at the entrance to The Emily Morgan.

At right, her tower and flag flying.

The Emily as seen from the across street. 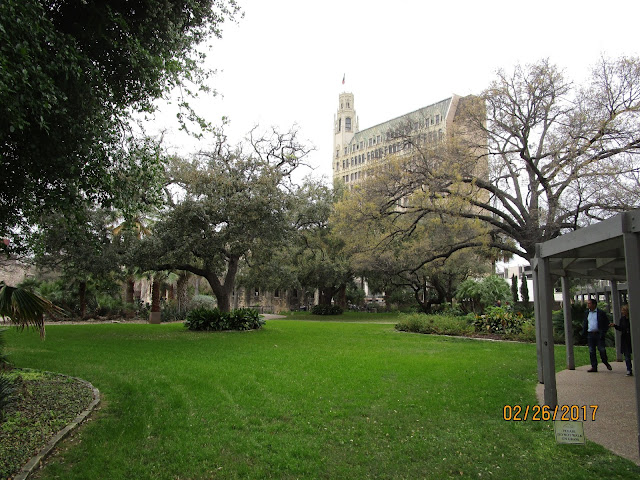 And across the street from The Emily is this place. 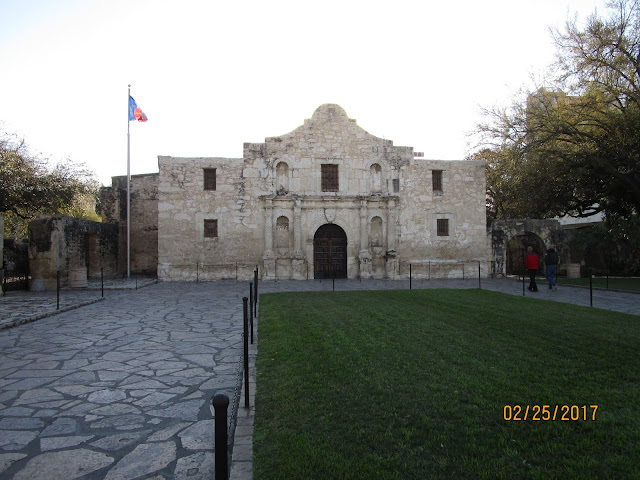 That's right, The Alamo. It turned out to be special as February 23 through March 6th marks the 181st anniversary of the siege and fall of the Alamo. Although I didn't get any pictures, enactments and readings were/and are happening each day. Every time I walk through those doors I get covered up with goosebumps. There's a special energy inside that is tangible to those open to it. Heroes died within these wall, their blood soaked into the soil beneath the flagstone floors. 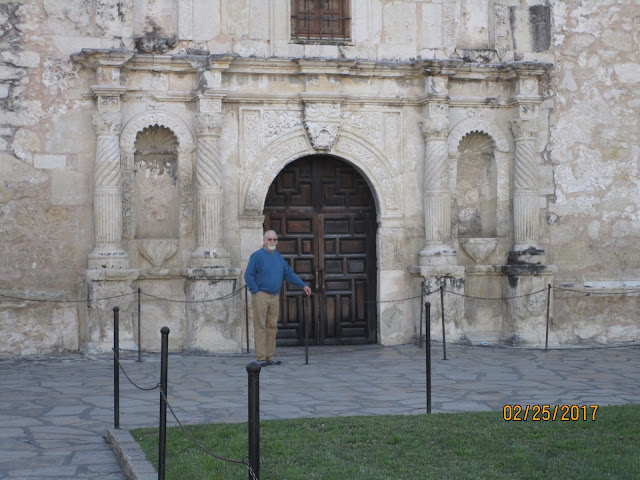 A model of how The Alamo looked after the siege. What was left of the actual mission building. 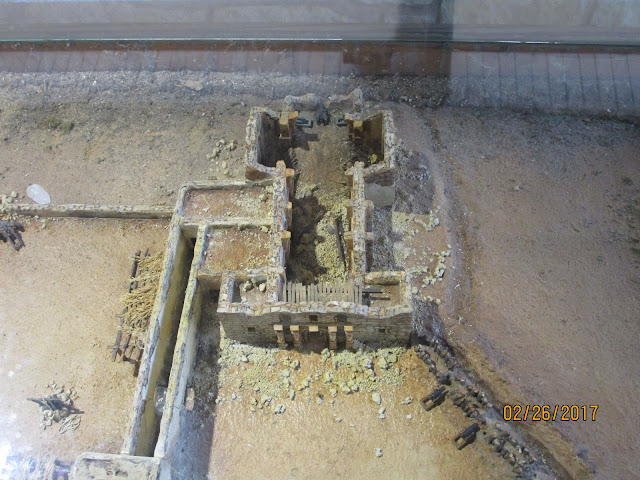 The back wall of The Alamo. 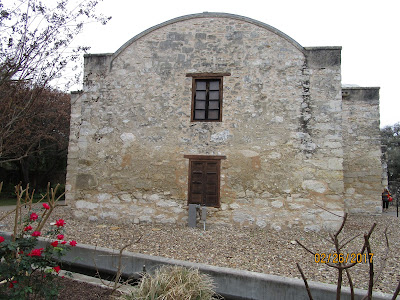 After The Alamo, we took Frances to Mission San Jose,
the construction of which was begun in 1724. 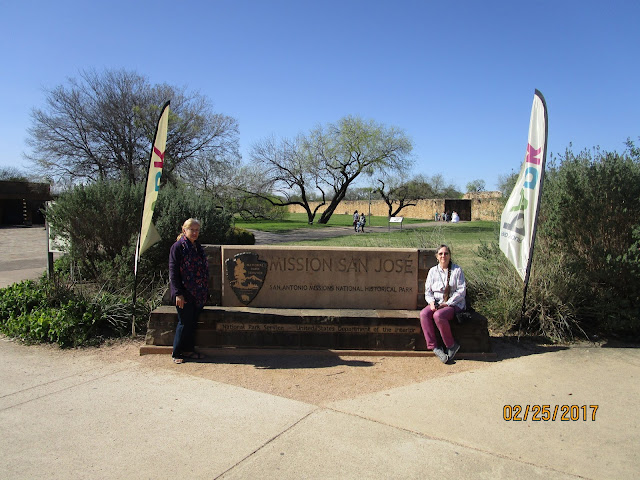 The mission walls enclose an area of about four acres. (Outside the wall.) The walls and the mission have undergone extensive reconstruction and restoration. 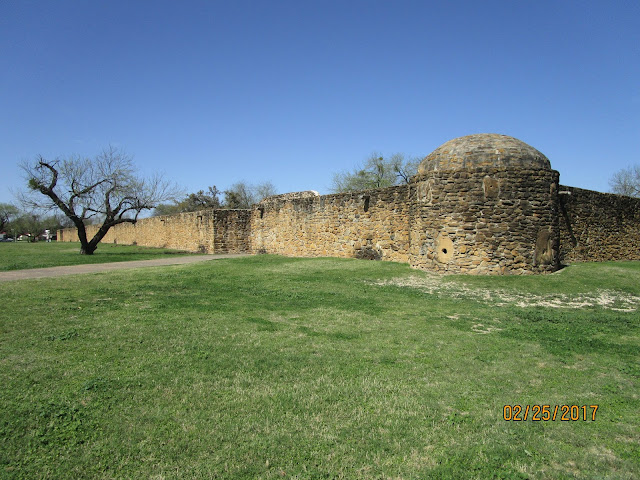 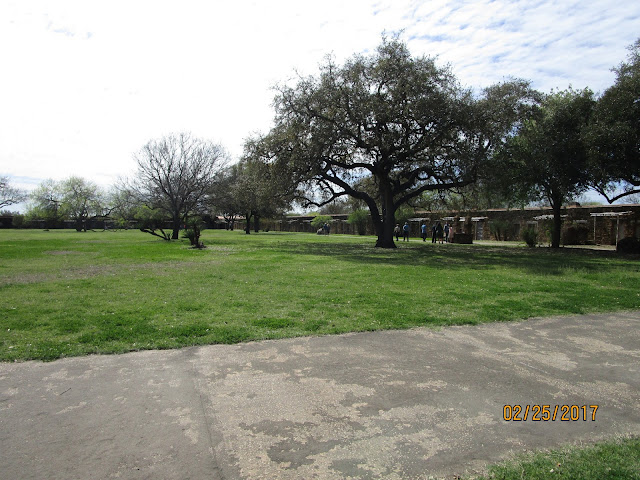 The walls are actually rows of small rooms where the Spanish missionary monks endeavored to get the Native American peoples to live. 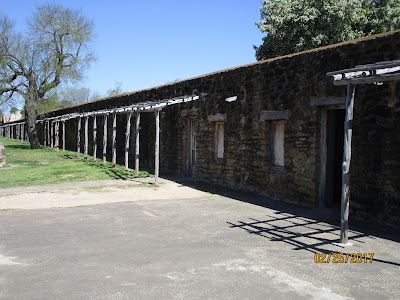 Mission San Jose. The dome and much of the walls has been restored or rebuilt. 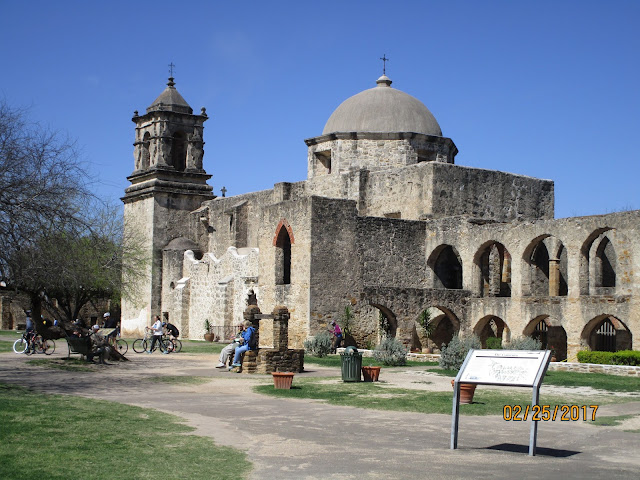 Originally the entire building was plastered and painted with geometric designs that had a decidedly Moorish feel to them.  Only a small section has survived. 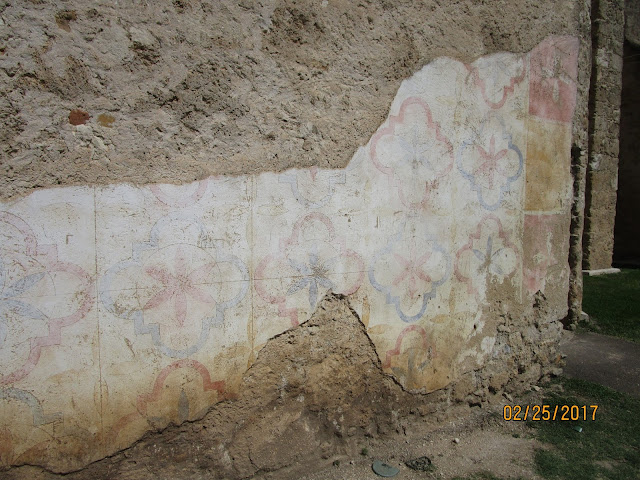 The front entrance. The section of painted plaster that remains
is on the right wall that is bathed in sunlight. 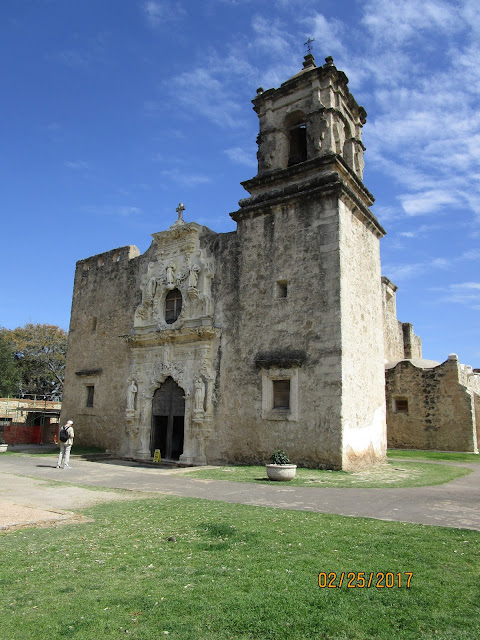 The famous Rose Window. From the National Park page: "La Ventana de Rosa, the Rose Window, is located on the south wall of the church sacristy. The window has been described as the site where the Host was shown to gathered mission celebrants during the Feast of Pentecost. The window, sculpted ca. 1775, has been the object of both legend and admiration. It is considered one of the finest examples of baroque architecture in North America. The meaning behind the name is currently unknown, but legend has it named for Rosa, the betrothed of Juan Huizar who many believe created the window." 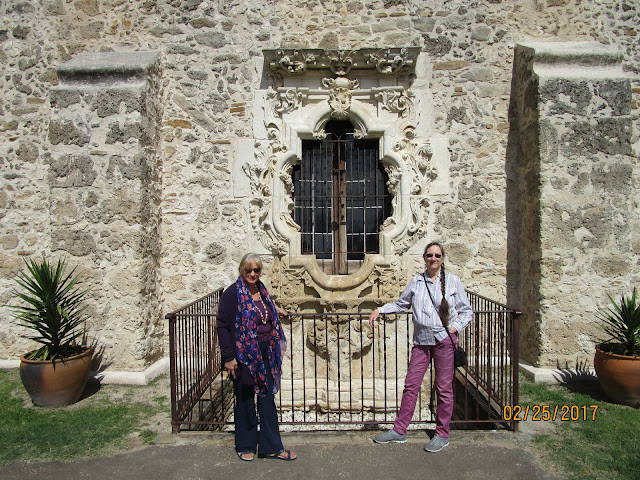 It was a nice visit. We couldn't have asked for better weather.
As for Being Thankful, this is it.

***
What are you thankful for? Every been to The Alamo? Is it a place you'd like to visit? Do you enjoy visiting old churches and buildings?