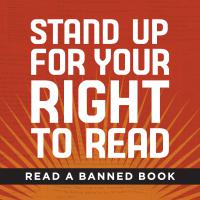 It's Banned Book Week. In honor of this hallowed time, I'm going to offer up a few of my favorite books that have been challenge or banned somewhere in the world. I have taken the descriptions for why these books were targeted from THIS SITE.


The Adventures of Huckleberry Finn, Mark Twain, 1884
The first ban of Mark Twain’s American classic in Concord, MA in 1885 called it “trash and suitable only for the slums.” Objections to the book have evolved, but only marginally. Twain’s book is one of the most-challenged of all time and is frequently challenged even today because of its frequent use of the word “nigger.” Otherwise it is alleged the book is “racially insensitive,” “oppressive,” and “perpetuates racism.”

The Call of the Wild, Jack London, 1903
Generally hailed as Jack London’s best work, The Call of the Wild is commonly challenged for its dark tone and bloody violence. Because it is seen as a man-and-his-dog story, it is sometimes read by adolescents and subsequently challenged for age-inappropriateness. Not only have objections been raised here, the book was banned in Italy, Yugoslavia and burned in bonfires in Nazi Germany in the late 1920s and early 30s because it was considered “too radical.”

To Kill a Mockingbird, Harper Lee, 1960
Harper Lee’s great American tome stands as proof positive that the censorious impulse is alive and well in our country, even today. For some educators, the Pulitzer-prize winning book is one of the greatest texts teens can study in an American literature class. Others have called it a degrading, profane and racist work that “promotes white supremacy.”

Fahrenheit 451, Ray Bradbury, 1953
Rather than ban the book about book-banning outright, Venado Middle school in Irvine, CA utilized an expurgated version of the text in which all the “hells” and “damns” were blacked out. Other complaints have said the book went against objectors religious beliefs. The book’s author, Ray Bradbury, died this year.

Leaves of Grass, Walt Whitman, 1855
If they don’t understand you, sometimes they ban you. This was the case when the great American poem Leaves of Grass was first published and the New York Society for the Suppression of Vice found the sensuality of the text disturbing. Caving to pressure, booksellers in New York, Massachusetts and Pennsylvania conceded to advising their patrons not to buy the “filthy” book.

For exploring books that have been banned or challenged, go HERE and HERE. For a very extensive list go HERE. It's mindboggling.

Even the Wizard of Oz has been banned!! Read a banned book, it might just fool you.

Being Thankful
Today I'm thankful to books, banned or not.
I may not read or like all genres.
I may not like all styles of writing.
(I never cared for *gasp* Hemingway, but love Steinbeck)
But I would never tell another what he or she cannot read.

You still have until the 30th to win a copy of The Bowl and the Stone: A Haunting Tale from the Virgin Island. Check in at Goodreads!

What are you thankful for? Got a favorite banned book?
Posted by Bish Denham at 4:00 AM