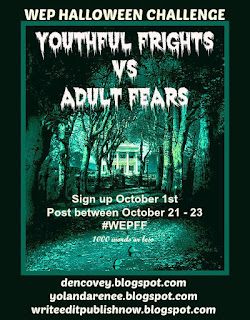 This month's challenge from
Write, Edit, Publish is about
Youthful Frights vs Adult Fears

It's Halloween, time to scare
family and friends.
Do you remember the monster under the bed? When I was a child, I knew it was a man-eating lion. He'd disappear when someone walked into the room, but stick an arm or leg over the edge and he'd snap them off.
What about the creepy house just down the street, the one you passed by every day on the way to school? Did you imagine someone watching you from the broken window?
Remember the cornfield that went on for miles and miles. Did you ever run through it and get lost among the dying stalks? Remember the panic that set in and the laughter of your cousin, when you finally emerged with the stain of tears on your face certain that something had been hunting you.
Or maybe it was more benign, a graveyard that looked serene during the day, but at night unexplained lights would move among the gravestones and give you the chills or worse.
Tell us about the horror that stalked you in the night. Write about it for this month's challenge and turn those childhood fears in a scare-fest like no other.

Here's my contribution, a deleted scene from a novel of mine. Both the novel and the scene are based loosely on fact.

"Once there was this really mean man," said my best friend Gordie. "He was so mean nothing grew on his farm."

"He was married," I continued, "and had three kids. He drank a lot and blamed them for his not being able to grow anything."

"One night he got really drunk and went into a terrible rage. That's when he did it." Gordie paused for effect.

"Did what?" asked the thin, pale tourist boy who looked like an albino salamander. His equally pale sister pretended not to listen by looking at her nails.

"That's when he killed his wife and kids," he answered.

"Hacked all four of 'em to bits." Gordie waved his arm like he was slicing something up. "Scattered their body parts all over his land. He thought it would make things grow."

"Gross!" The girl covered her mouth with a hand and turned green as a genip.

"It gets better," I said. "He was caught and tried and they hung him right here at Gallows Point, which is where they hung all the criminals and pirates back then. Even though he was a bad man his brother wanted to bury him all proper, so he built him a small concrete tomb."

Gordie, looking thoughtful said, "The problem is he's restless. He keeps getting out of his grave and wandering around Gallows Point with that machete, hunting for the people who hanged him. People have heard him scraping his machete along the walls of the cottages, particularly the one you're staying in. And, because he keeps climbing in and out of his grave, it keeps moving. Sometimes it's up near the road, sometimes closer to the genip tree."

I saw the boy swallow. And the girl's eyes went wide.

What scared you as a kid? Got a scary story to share in the comments? Are you going to visit other WEP participants?
Posted by Bish Denham at 4:00 AM