"A few" is very similar to "a couple," both of which I bet all of us have used a few more times than necessary. Some of these synonyms didn't (and don't) make a whole lot of sense to me, like "manifold" and "marked." In fact, after I had snared these words in my net, I deleted a few from the list. It's probably of no consequence, a piddling matter to be sure.

a couple, a lot, abounding, abundant, any, atom

few and far between, fragment

negligible, not many, not too many, numberless, numerous

It was the White Queen, from Through the Looking Glass, who said to Alice: "When I was your age, I always did it for half-an-hour a day. Why, sometimes I've believed as many as six impossible things before breakfast."

When life gets you down think of, or believe, six impossible things before breakfast. Take a deep breath and close your eyes. If you are aren't smiling by the sixth thing, think of six more. Keep thinking of impossible things until you smile, or until you understand that life itself is impossible. Yet here we are.

Here, for your entertainment, are Six Impossible Things. You can believe them or not as you wish.

1. Flying monkeys on Mars (Maybe the first travelers to Mars will take The Wizard of Oz with them.)
2. Time travel (There are scientific hints that it might be possible.)
3. Having tea with Gandhi (Which is why I could have tea with Gandhi.)
4. Snakes with legs (When they are able to recreate dinosaurs from DNA, they will be able to make snakes with legs.)
5. Turning green and disappearing into the foliage (I could dye myself....)
6. Being a bolt of lightening (Well I suppose I could get struck by lightening which would probably be the same as becoming a bolt of lightening.)

See? Believing in six impossible things isn't so impossible after all!

Today I'm thankful for dogs I've had in my life. 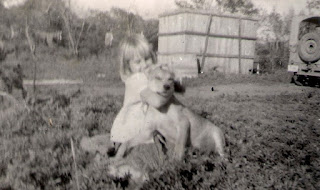 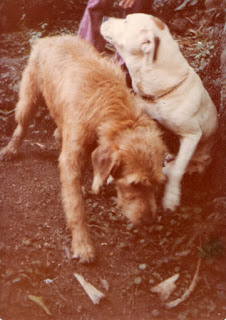 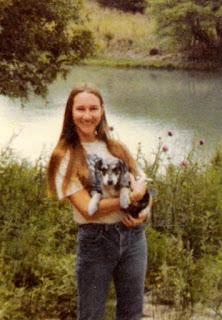 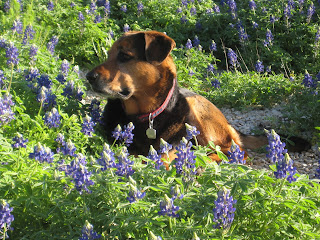 And there are other dogs, like Tricksy, Lassie, Cheese, and Whitey, each of them with a unique personality who hold special places in my memories.

What are you thankful for? Have a favorite pet? Care to share an impossible thing? Got a preferred alternative for A FEW?
Posted by Bish Denham at 4:00 AM