It was 1961, I was eleven, and I didn't want to meet him. Truth is, I didn't have much respect for stateside kids. They were always terribly flawed is some way.

Jay's mom had arrived a couple of months early to set up a household. Her husband and son were to follow at the end of the school year. Because the  population of St. John was so small, everybody knew everybody and the the arrival of new people was both a curiosity and a change of scenery. Betty fit right in. She was colorful, talented, and friendly. It wasn't long before she was hobnobbing with other mothers, which meant I soon learned she had a son just my age. She was positive we'd get along great and that I'd just love him.

Of course, I knew better.

Fourth of July came around and I was running around in the park in Cruz Bay, along with a lot of other kids. There was all kinds of stuff happening. Food booths and tables were wafting the aromas of whelk fritters, conch chowder, and kallaloo (to name just a few) into the air. A steel band was playing. Beer and alcohol was flowing. Adults were visiting. It was a wonderful crowded, noisy, mishmash.

In the midst of all that Betty spotted me, called me over, and grabbing me by my arm said, "Jay's here! Let me introduce you."

Being raised to be polite to my elders, I couldn't get away. But I was cringing inside. We'd be going to the same school. We'd have to see each other every day. And I KNEW, I wouldn't like him. Experience had already taught me that stateside kids were whoosies.


Now, I was short for my age and a slow grower.

My sister, Erva, and I, in 1960 a year before I met Jay. She's about 14, I'm about 10. When standing next to her, people who didn't know me thought I was maybe 6 or 7. This irritated me to no end because it caused people to treat me like a baby.

Back to the story... So there I am being pulled along by Betty and when she pointed to where Jay was standing by the old cannon, my first thought was, "Oh my god, what a little dwarf."

At the sound of his name being called, he turned and our eyes met. At 11 neither of us understood what was happening or had the words for it, though years later we talked about it.

Before we ever spoke a word,  we recognized each other. It was like like we were old friends who'd known each other before in another life and were absolutely thrilled to be together again. It was powerful and immediate.

From that moment on we were pretty much inseparable and the ratio in our heights remained the same into adulthood. 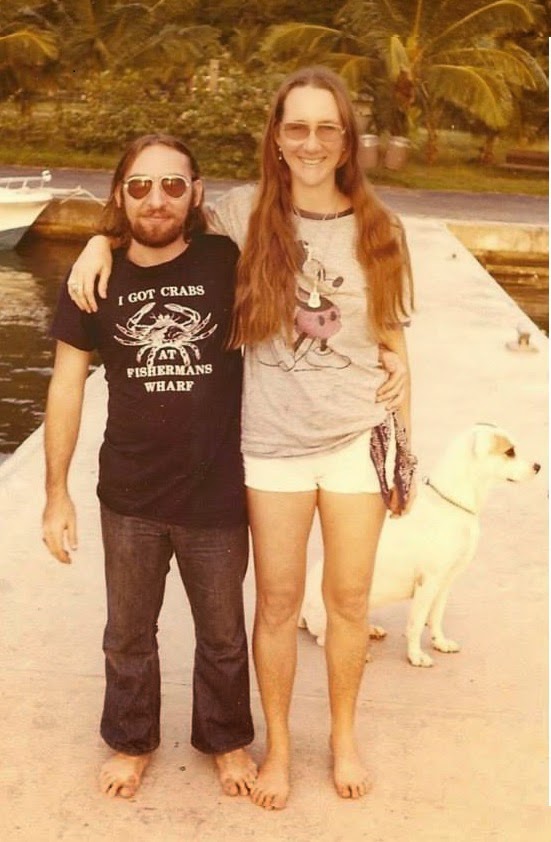 I have four pictures of us in this basic stance. That's my dog, Anna, behind us.

Did you have a childhood BFF? If you did, how did you meet? Are you still friends?
Posted by Bish Denham at 4:00 AM

Email ThisBlogThis!Share to TwitterShare to FacebookShare to Pinterest
Labels: Jay