C is for Cooking Pot

Because so many Anansi stories have to do with acquiring and eating food, the cooking pot frequently makes an appearance. It is a most valued possession. 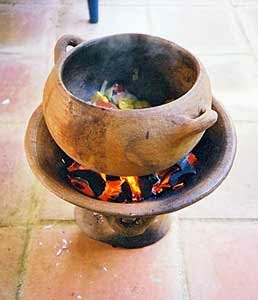 There is also the coal pot used for cooking food. The two go to together like a beans and rice or fish and fungi -- fungi is boiled cornmeal which usually has okra in it.

Legend has it that Tim Duncan of the San Antonio Spurs (and native Virgin Islander) used to be called Fish 'n' Fungi because of his love for the dish. I don't know if that's true or not, but it's a nice story.

When I was a kid we used coal pots. My grandmother had one by her chair in the dining room of her guesthouse and every morning she'd toast slices of her freshly baked bread for her guests.
Posted by Bish Denham at 4:00 AM

Email ThisBlogThis!Share to TwitterShare to FacebookShare to Pinterest
Labels: A to Z challenge, Anansi, Cooking Pot