An Award and Wins!

The cogs of the Universe have been lining up and pointing their WIN signs at me. I certainly don't know why I deserve it, but I'm thankful.

Carol Kilgore, at Under the Tiki Hut recently gave me the Sisterhood of the World Bloggers Award. THANKS, CAROL! 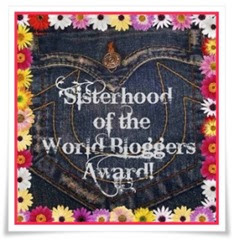 Here are my choices, in no particular order.

Barbara at Far Away Series  is a woman who doesn't seem to be afraid to pack up and move when the mood strikes her.

Anne Gallagher at Piedmont Writer  is a perennial favorite. Even though she hasn't been blogging much lately, she's still an inspiration to all of us working to self-publish.

Joy at The Character Depot  is someone I look up to and think of as a Caribbean sister.

Cynthia Chapman Willis continues to inspire and share while doing battle with cancer.

Medeia Sharif is awe inspiring to me because of the number of books she manages to read and review.

C. Lee McKenzie at The Write Game because I think of her as a good friend and because she knows the value of awards.

Manzanita at Wanna Buy a Duck is an example for all of us on how to age with grace and energy.

Robyn Campbell because you can feel her smiles and good will through the words of her blog. And this, in spite of health challenges in her family.


I was also surprised by two prizes.

Someone, I have no idea who (thank you secret admirer) nominated me for Misha Gericke's  Paying it Forward Awards. When Misha emailed  me to say I'd won I was really kind of stunned. I got to choose from all these fabulous prizes Misha arranged to give away. Because I'm always in need of reading material, I opted for an Amazon gift card. THANK YOU MISHA!

Lastly, for the first time ever, I've won a Goodreads giveaway! Out of 1186 people with 50 books available, I won a copy of The Time Fetch by Amy Herrick. Edward thought he had picked up a rock. He didn’t know it was a sleeping Time Fetch—and touching it would alter the entire fabric of time and space.
Under normal circumstances, a Time Fetch sends out its foragers to collect only those moments that will never be missed or regretted. It then rests, waiting to be called back by the Keeper, who distributes the gathered time where it is needed in our world and others.When Edward innocently mistakes a sleeping Fetch for an ordinary rock, he wakes its foragers too early, and they begin to multiply and gobble up too much time. Soon the bell rings to end class just as it’s begun. Buses race down streets, too far behind schedule to stop for passengers. Buildings and sidewalks begin to disappear as the whole fabric of the universe starts to unravel.To try to stop the foragers, Edward must depend on the help of his classmates Feenix, Danton, and Brigit—whether he likes it or not. They all have touched the Fetch, and it has drawn them together in a strange and thrilling adventure where the boundaries between worlds and dimensions are blurred, and places and creatures on the other side are much like the ones they’ve always known—but slightly twisted, a little darker, and much more dangerous.

Sounds pretty exciting, yes? Have you won or given away anything lately? Do you have a favorite something that you won?
Posted by Bish Denham at 4:00 AM