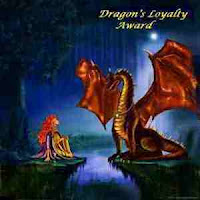 Last week, long time follower and friend C. Lee McKenzie over at The Write Game gave me the Dragon's Loyalty Award. Makes me feel kind of special since she also gave it to M. Pax and Alex Cavanaugh. Those are a couple of pretty auspicious people in my book and to be included in with them means a lot.

I don't usually follow the rules when being given awards. I just say thanks, offer the award to anyone who wants it, and leave it at that. But for this one, I'm going to go the distance because loyalty means something and needs to be acknowledged.

So the rules are:

Seven Interesting Things About Me: Well... I don't know if they're interesting, but here they are any way.

1) For our senior high school trip we went to Caracas, Venezuela. While we were there we were shut into our hotel for a whole day as college students rioted just down the street. They were protesting the U. S. bombing of Cambodia. There were police (or army) at the door of the hotel with AK47 type rifles to protect the mostly American visitors staying there. We could see the riots from our hotel rooms. It was scary, but exciting at the same time.

2) I really do hate shoes and go barefoot as often as I can.

3) I have traveled quite a bit by Greyhound Bus (Florida to California, California to Florida, Texas to Florida, Florida to Pennsylvania) with smaller journeys in between.

4) I've never been to Chicago.

5) I spent the whole summer of 1967 in Arlington, Virginia and frequently went into Washington D. C. I can proudly claim that I walked up the Washington Monument twice and walked down it once.

6) I have been to the top of the Empire State Building.

7) I have flown in a DC3, the plane really responsible for opening up commercial flying to the masses. In the 1950s and 60s it was the plane used by the airlines to fly between St.Thomas and Puerto Rico and since we went over to PR fairly often, we flew in DC3s. I can still here the sound of the engines starting and the props beginning to spin. A wonderful throaty noise. Built between 1936 and 1950, these planes were incredibly reliable and, there are still some out there, winging their way through the skies. I'd love to take another ride on one!

Have you been to the top of Empire State Building? Flown on a DC3? Taken a Grayhound  Bus? Been to a foreign country? Visited Washington DC?

For their LOYALTY in being among my earliest followers I pass on this award too:
Anne Gallager, Tricia O'Brien, Christina Farley, Cynthia Chapman Willis,  Kelly Polark, Robyn Campbell, and Angela Ackerman.