F is for Fable

Fable: From Middle English from Middle French from the Latin fabula meaning conversation, story or play from fari meaning to speak. The ula suffix means "little" thus, "little story."
A fable writer was called a fabulist. Fabulous is a direct descendant though its meaning has changed from that which pertains to fables to that which is marvelous, incredible or has an exaggerated quality. The word confabulate, meaning to chat, confer or hold a discussion is a close cousin. A confabulator is someone who tells Tall Tales.
Fables can be found in most cultures. They were oral stories meant to be short and have a moral lesson. Some of the oldest fables date back to ancient Egypt, Samaria and India. For us the most well known fables are those of Aesop. The African and Caribbean fables about Anansi the Spider evolved into the stories of Uncle Remus. Other fables include The Arabian Nights, George Orwell's Animal Farm, and Richard Bach's Jonathan Livingston Seagull.
The Finest Tail, a Fable by Bish
Lizard believed he had the finest tail. "See how it lies against the leaf?" he said. "See how magnificent it is" 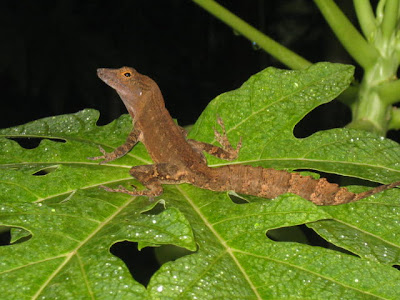 One day as Lizard admired his tail he heard news of a contest from Bird.
"The King is offering half his kingdom and the hand of his daughter to him with the best tail."
"Well," said lizard, "that would be me!"
On the day of the contest there was Mouse, Rat and Bird, Turtle, Mongoose, Gecko and many others besides. But Lizard could see none had a tail as fine as his.
The King told them all to line up and explained his daughter would judge. Lizard positioned himself at the end of the line as he believed in saving the finest for last.
Princess went down the line and carefully studied each tail. When she got to Lizard she began to laugh.
"Are you laughing at me?" asked Lizard.
"Why of course," said Princess.
"But I have the finest tail of all, how can you possibly laugh?"
"Your tail is the skinniest thing I've ever seen," she said.
"It can't be," he replied. "I have the finest...."
But Princess cut him short. "I've made my decision. Turtle has the best tail."
Moral: The finest is not necessarily the best.
What other morals can you take away from this story?
Posted by Bish Denham at 12:00 AM