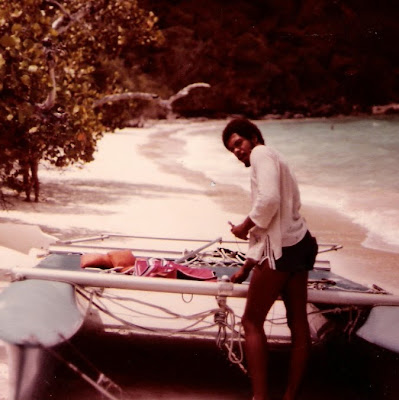 I learned on Friday that an old friend, Victor Hall, passed away. He was just 61 years old. His mom and my mom were best friends growing up together on St. John waaaaay back in the 1930s. Victor was part of the Bish Mob (as my mother called us) who were a group of boys I hung out with as a young teen.

One of the things the Bish Mob liked to do was go to Trunk Bay when it was loaded with tourists and stage fights. Fully clothed, three, four (sometimes as many as six) boys would all act like they were attacking me. I'd be screaming, running. They'd be chasing, capturing , and throwing me into the water. Once we thought we had a fair amount of attention we'd stop, shake hands, thank each other for a very nice game and say, "That was fun. We should do this again soon." After that, we'd change into our suits, hang our clothes out to dry on the seagrape trees and act like normal people at the beach. Victor was a part of that. He looked vaguely like Jimi Hendrix.

As young adults in our 20's he had a bar call The Kite above Peter Bay. Me and two other friends along with Victor played music there, entertaining tourists who wandered up the hill from the National Park Camp Ground at Cinnamon Bay. Victor played a mean kalimba. We had a lot of fun.
In later years he moved his bar out to Coral Bay and I hear it was featured on "Good Morning America." He became quite knowledgeable about local herbal remedies for various ailments and was known as the Bush Tea Man. You can see a picture of his original bar at Peter Bay and hear an interview with him here. He was an interesting character.
Once I moved to the states I lost touch with Victor. Still I will always have fond memories.

Good-bye Victor. Happy sailing. I bet you'll be accompanying other musicians with your kalimba, playing to the stars.
Posted by Bish Denham at 7:00 AM