Over the weekend we had a unique visitor, the Library of Congress's Rolling Exhibition. What a treat! I was so excited when I found out it was coming to our little town I went...SQUEEEEE!

Just what is the Gateway to Knowledge? This specially designed 18 wheeler is rolling across the southwest visiting towns and cities of less than 50,000 people, giving those who may never get to Washington, DC a glimpse into what our National Library has to offer. We were one of about 60 stops. 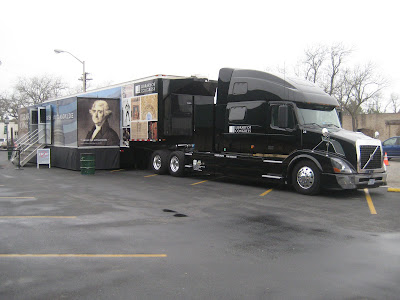 Although there are no actual documents or items from the library, one gets a wonderful mini walking tour of the history of the Library, starting with Thomas Jefferson who donated his books to Congress after its library was burned. His was the largest private collection of books then in existence, 6, 487 volumes. In time there were so many books coming into the Congress Library that a new building we know as the Thomas Jefferson Building was constructed.
In a letter to John Adams Jefferson wrote, "I cannot live without books." 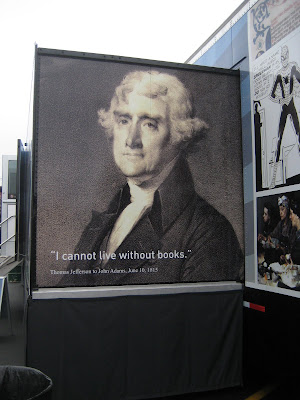 The mini tour took us through the history of the earliest maps and the importance of the Gutenberg Bible, the first book printed with movable type. Did you know Korea had movable type 200 years before Europe? We saw an illustrated codex made by Indians in Mexico at the time of Cortez, learned about Clara Barton, founder of the Red Cross, saw facsimiles of the first printed edition of the Declaration of Independence, learned about Alexander Bell and the telephone, saw clips of the earliest moving pictures, viewed stunning illuminations and calligraphy from ancient Persia and China, read about Walt Whitman's Leaves of Grass and Jelly Roll Morton's rag-time music. And lastly, there were pictures of the original drawings of Spiderman. 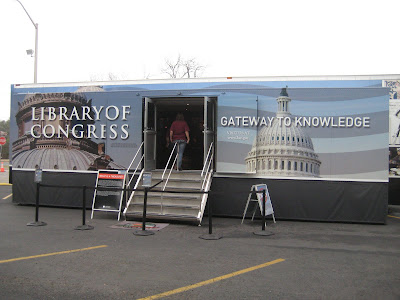 145 million items reside within the walls of the Library of Congress and it grows every day. It's not just books either. There are sound recordings, motion pictures, photographs, maps, sheet music, and manuscripts numbering in the multi-millions. And all of it is free (our tax dollars at work) to We The People. Much of it is also available online at http://www.loc.gov/ 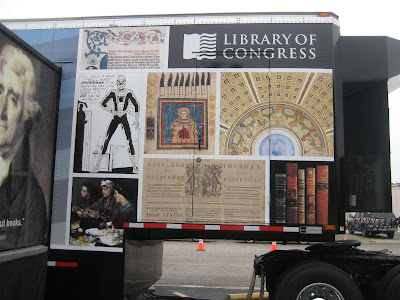 Thomas Jefferson said to James Madison, "Educate and inform the whole mass of the people...They are the only sure reliance for the preservation of our liberty." 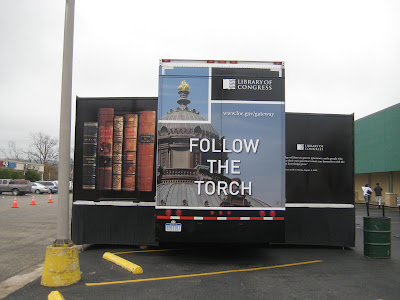 Follow the torch!
I finally know what my dream is. I want my book(s) in the Library of Congress. What's your dream?
Posted by Bish Denham at 12:00 AM

Email ThisBlogThis!Share to TwitterShare to FacebookShare to Pinterest
Labels: Books, Library of Congress