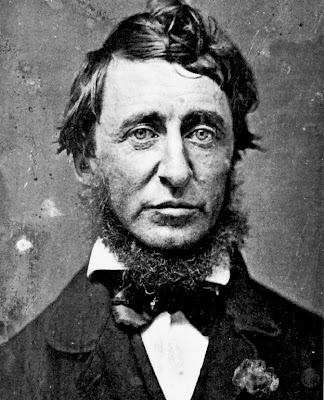 Not a particularly good looking as a young man. Nathaniel Hawthorne described him "...as ugly as sin, long-nosed, queer-mouthed, and with uncouth and rustic, though courteous manners, corresponding very well with such an exterior. But his ugliness is of an honest and agreeable fashion, and becomes him much better than beauty."
I think he looked better as he aged. 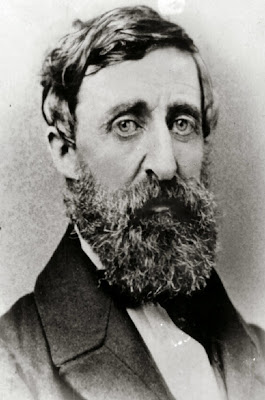 But his eyes seem sad to me, perhaps because he knew he would die young. He lived only to the age of 44.
His contemporaries included his mentor and teacher Ralph Waldo Emerson, Nathaniel Hawthorne and Louisa May Alcott.
In high school I wrote an essay comparing Thoreau's "Civil Disobedience" with Emerson's "Self Reliance." I wish I still had it. I remember arguing that Thoreau was a bit of a hypocrit not wanting to pay taxes yet still use the public roads, so therefore being self reliant was more important than civil disobedience. I should read the two essays again and see what I make of them now.
Even though I preferred Emerson to Thoreau, I loved Walden and appreciate his contribution to American literature and philosophy. Certainly he had a deep love of nature and the world around him.
Which brings me to his quote, this from a man who lived between 1817 and 1862.
What is the use of a house if you haven't got a tolerable planet to put it on?
And here we are....Think what we could have done in the last 150 years or so to preserve what we have if we had been about doing instead of about talking.
What are you doing this year to help our planet home?
HDT also said, There is no remedy for love but to love more.
Posted by Bish Denham at 12:00 AM