CRITTER IS UP FOR AUCTION

The following is from Christy Evers.

Click here to go directly to Critter's auction on e-bay!

It has been 15 month, and the time has finally come for Critter's auction! Along with Critter in all his autographed glory, I also made a nice little 20 page scrapbook documenting his travels. you can see the details of the scrapbook by clicking here. 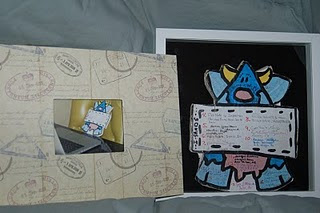 This is a picture of what artist,Robert Bateman wrote on Critter's backside. 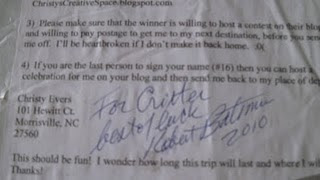 Are you just finding out about Critter right now? Who is Critter?
Good question.

For over 14 months Critter has traveled the world visiting talented writers, artists, and authors: while exploring their world. Christy Evers sent out Critter after an interactive art project, directed by the cutting edge artist, Ian Sands.

Critter has visited (and was signed) by PJ Hoover (author of the Forgotten Worlds trilogy) and the Texas Sweethearts, in Texas. Beth Revis in North Carolina (whose debut novel, Across the Universe, coming out in January 2011, is expected to be a HUGE success!). Christina Farley in Korea, New England with Nandini Bajpai, Illinois with Kelly Polark, (who is frequented in Highlights magazine), MG Higgins in California, Rena Jones (author of multiple picture books) in Montana, Cynthia Leitich Smith (NY Times best-selling author) in Texas, Bish Denham in the Virgin Islands, Jacqui Robbins (author of “The New Kid and Me”, and “Two of a Kind”) in Michigan, Tina Ferraro, (author of “How to Hook a Hottie, Top Ten Uses for an Unworn Prom Dress, and The ABC’s of Kissing Boys) in California, Cynthia Chapman Willis, (Picture book author of “Dog Gone” and “Buck Fever”) in New Jersey, Jill S. Alexander, (YA author of “The Sweetheart of Prosper County”) in Texas, Ellen Oh in Virginia, Alberta, Canada with Angela Ackerman (the blog-genius behind the “Writing Thesaurus”. The World-famous artist, Robert Bateman, also signed Critter (on his backside) as an honorary host.

Critter’s Travels have caused him to be beaten around the edges and cracked just a bit, but I think that adds to his charm . . . scarred like a foam-board Indian Jones (for St. Jude) or something like that. It hasn’t taken away from the integrity of the signatures, though. He has traveled the globe in 14 months. He looks pretty good (for being handled by the U.S. post office) The signatures of fabulous people (in addition to his worthy cause) well makes up for his worn edges. Upon his return trip to me he was cracked a bit, but it was easily repaired with super glue.

The winning bidder will receive THE autographed (by the notable people mentioned above) Critter as well as a 20-page scrapbook documenting his travels.

He will be shipped in the flag-case, as shown in the picture, along with the 20 page scrapbook (designed by Snapfish).

You can view Critter's travels on the sidebar of my blog at http://ChristysCreativeSpace.blogspot.com


%100 of the winning bid will go to St. Jude Children's Research Hospital.
Posted by Bish Denham at 9:17 AM