Come join the fun that is CRITTER and win awesome prizes too!
by Angela Ackerman
For over a year now, CRITTER, the creation of artist Ian Sands, has been travelling the world, meeting many talented writers and authors and exploring where they live. At each stop he learns more and more about KIDLIT and the importance of literacy and creativity. This journey was the brainchild of Christy Evers, who got her hands on Critter after an interactive art project of Ian’s, where 500 Critters were hidden all over her city for people to find. 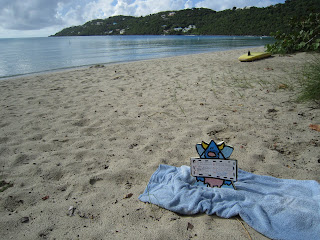 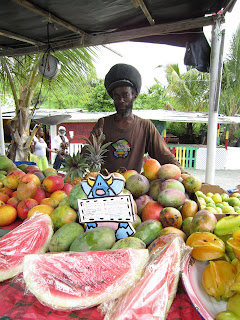 Critter with artist and farmer, Breed.
Critter has been to college, rock concerts, national landmarks, a palace, attended his first SCBWI conference, walked among giant redwoods, and met the world famous artist, Robert Bateman. Now that his journey is coming to a close, it’s CRITTER’S hope that you will help him celebrate over at The Bookshelf Muse. His new hosts, together with old hosts, have teamed up to create the Kidlit-inspired event, Critterpalooza! and you’re invited!

There are many AMAZING prizes to be won, all in the spirit of helping Critter celebrate the wonderful creativity & support within out KIDLIT community, and to also raise awareness for his charity, St. Jude’s Children’s Research Hospital.

If you would like to donate a few dollars to Critter’s charity, just click on the I Love St. Jude button. Children’s lives are saved every day thanks to the support of people like you! 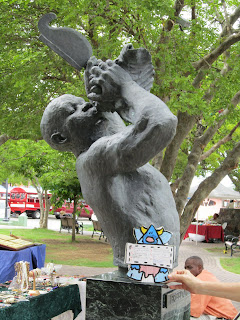 Critter shows us how to blow a conch shell.
Posted by Bish Denham at 12:00 AM