H is for Harpy and I is for An Impressionist with an Infinite number of Individual Idiosyncratic Ideas. 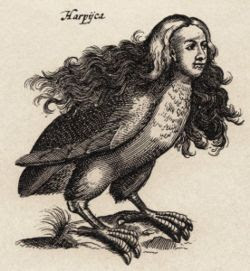 Harpy: literally means "that which snatches" from the Latin harpeia from the Greek harpuia. In Greek mythology she was a winged being, half woman, half bird who stole food from Phineas. Phineas had the gift of prophecy and apparently said too much about the plans of the gods. Zeus being Zeus got pissy about it and blinded poor Phineas. If that wasn't enough Zeus placed him amidst of sea of food. Each time Phineas was about to put something to his mouth the Harpies came and snatched it out of his hands.


A shrewish woman is called a harpy.

And yet we have the harp, a musical instrument that produces the most beautiful of sounds. Inspired by listening to my father's record of Harpo Marx, I wanted to learn to play the harp . But my mother pointed out it would be like lugging around a piano. Imagine...piano, jeep, four-wheel drive roads.

As for the bird above, she is related to the mind games of C is for Cranial Contortions. I think we all know someone like her. This person grates on our ears like the screeching breaks of a locomotive train.

What makes it so destructive is that it tends to be our own inner voice. We are our own worst harpy. At least I am.

I've spent a life-time keeping her voice muffled. Most of the time she's locked up in the dungeon but she does break out from time to time. Her threats are mostly gaseous belches that stink so she doesn't frighten me any more. Besides easy to turn her negative into positives.

What about you? Are you able to keep your inner harpy in chains?

As you can see I had trouble deciding on an "I" word.

I like playing with words so here for your amusement are five sentences containing all five words. This is something you can do as a writing prompt with any group of random words.

An idiosyncratic impressionist is an individual with an infinite number of ideas.

Infinity is the place idiosyncratic individuals long to be so they can express their impressionistic ideas.

Impressionism is an idea for individuals of an infinitely idiosyncratic bent.

Ideas can be found in an infinite number of idiosyncratic places, particularly by impressionistic individuals.

Individuals of an idiosyncratic nature tend to have an infinite number of ideas and may become impressionists.