Where had it gone?
Our rocky road had simply vanished. Happy, who was exploring ahead, came to the place where ghut met sky and hills, came to the place where the ghut ended. He stood there on one of many large boulders waiting for us. We hurried towards him as fast as we could, drawn to the mystery.
And then...as we climbed over a bunch of rocks we came face to face with a geological phenomena unique to St. John.
Dropping away at our feet, going straight down was a rock fall. I'm not sure how tall it is, Erva thinks maybe 75 feet. And there were the pools of water! The one at the top was maybe 15 feet long and 8 feet wide. And far below us, the pool at the bottom was MUCH bigger, 20 feet long maybe and 15 feet wide. The water, though brown in color was clear and sweet. Yes we drank some and were not harmed. And to our amazement things were living in it, and not just tadpoles. There were crayfish!
It was like being in a cathedral. Even we, two young girls, could recognize, sense, the specialness of the space. I don't remember our talking much. I think we mostly sat on the rocks and soaked up the essence of it all as our feet dangled in the surprisingly cold water.
It was easy to imagine escaped slaves hiding up in the hills; places too isolated, steep, and rocky to have been terraced by plantation owners. It was easy to imagine them gathering water from these pools. Yes, they had been here.
I'd like to think we were the first white people to ever see it. It seems possible.
Erva and I ate our sandwiches as we lounged on the sun bathed rocks. All that could be heard besides Happy panting contently near-by, was the breeze blowing through the trees, the echoing calls of various birds, the rustle of lizards as they scurried about the dead-fall. We were utterly alone in the world. We didn't want to leave, but we knew we had to get back home to The Castle before it got too late. As we didn't have a watch we had to keep track of time by keeping track of where the sun was. There is no long twilight in the islands. When the sun goes down it gets dark very quickly. Down there in the ghut it would grow dark even more quickly because of the steep hills. It was kind of like being in the Grand Canyon. We had to get back home.
We didn't get lost, we found our way out without a problem. But we were changed. We were somehow different than we had been only a few hours before. We knew something very few other people knew about. Not only that, we had experienced something spiritual.
When we got home we were excited to tell Mom and Dad all about what we had found. I think it may have been next week-end we took Mom down to see it. She found rare terrestrial orchids, and we brought home the biggest walking stick we have ever seen before or since, a good 5 inches long, without feelers. It had landed on Mom's shirt and rode on her shoulder the whole way home.
On our third trip, Erva and I took Vince Mrazik, a National Park Service Ranger, and Henry Fafala, the head gardener for Caneel Bay to see that most miraculous place. But we didn't just go to the pools. We went all the way to were the ghut terminates into Fish Bay. We actually climbed down that waterfall by tying a rope to a tree and sort of belaying ourselves over the rocks. We found other pools of water, with crayfish in them as long as my forearm. Remember I was a small child...but still, those crayfish were BIG. We also found an old iron cauldron, the kind used to boil sugar cane juice, wedged into some rocks. At some time during a flood it must have tumbled it's way down the ghut before getting lodge. Dad met us at Fish Bay in our boat the FDO and took us back to Cruz Bay. Otherwise we would have had to have made the long hard climb up to the Monte Catchment before being met by someone in a jeep.
In the years that followed we took only the most special people to our special place. We learned the pools were deep. Deep enough to swim in. And yes, there was water in them year round.
Below, though yellowed with age are three photos taken at The Ghut in January of 1978.
That's Anna my dog, peeking over the top. She's happy, see that smile? 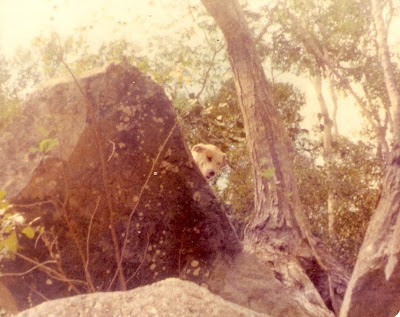 Here she is again, still smiling, directly above the upper pool. 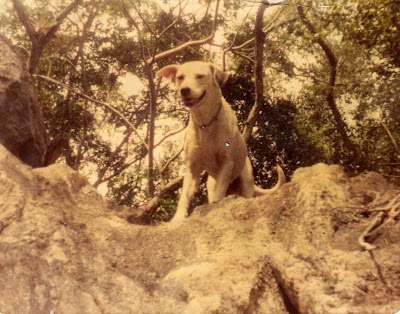 And this is the upper pool. At center left is an area that looks almost black with white speckles, that's the lower pool with reflected sunlight. It's a long way straight down. 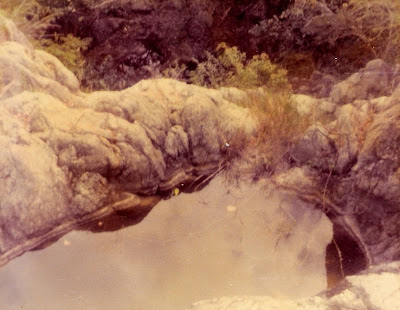 Geologically, the fall was caused eons ago when the earth shifted suddenly along a fault line, some of it falling away, some of it being pushed upwards. The fault still exists. It's possible one day it could shift again.
I have not been back in a long, long time. It's unlikely that I'll ever return as too many people know about it now and I fear I would find evidence of human thoughtlessness, trash, plastic. So I choose, as Erva does, to remember it as it was when we first saw it, a sacred place that gave itself to us and that never harmed us when we visited.
Posted by Bish Denham at 12:01 AM