Remembrances of Gifft Hill - The Ghut - Part One

The Virgin Islands are steep and volcanic in origin. Basically the the whole Caribbean chain is a mountain range, the islands are the tops of those mountains sticking up out of the ocean. St. John rises from sea level to its highest point of 1277 feet at Bordeaux Mountain, boom, just like that. There is no gradual. The hills are all pushed together like a piece of fabric that's been casually wadded up and tossed on the floor. Roads and trails twist and turn and go up and down with very few places that are flat.

In between all the folds of hills there are ghuts (pronouced "gut".) Ghuts are dry washes or gullies. (I don't know where the word ghut comes from it's not in my big dictionary. It might be Danish.) When it rains little ghuts feed into large ghuts which feed into big ghuts that carry the water to the sea. When we have heavy rainstorms (floods) in the islands we call them ghut washes. But no matter how hard it rains, a ghut never runs for long. Once the rain is over, the flow stops within a few days and the ghut dries up within a week to ten days. My sister and I, along with various friends, explored many ghuts as it was exciting to discover either where they originated or where they ended. They were most fun to explore after a good rain because when the ghuts were running, there were small waterfalls and pools full of tadpoles. They are transformed from dry rocky stream beds into a wet magical fairyland. We could sit in pools and have water pour over us. We could pretend we were in Hawaii or the Amazon or some other equally exotic wet place.
When Heber Thomas finally showed me and Erva where the trail was that led to a ghut he said had water in it year round, we were determined to go exploring. It just didn't seem possible that anything like that could exist. Year round pools of water? No way.
One Saturday Erva and I were left at home to our devises, something that didn't happen too often. Mom and Dad were probably working at The Garage in Cruz Bay. It was the perfect opportunity. We decided to take off into the bush in search of what was to become known in our family simply as The Ghut. Erva was 12, I was 8.
Erva, being a girl scout, brought along her girl scout knife and a canteen of water. We also made a couple of sandwiches. But most importantly we took our dog, Happy. We knew he would lead us back home if we did get lost. Happy was one of those dogs, if he took it into his head that he didn't want to be left alone at home, would track us down. He'd found us several times, at The Garage, at Trunk Bay. These places weren't just down the road, they were three to five miles away. He'd just suddenly show up, all happy to see us and demanding to know, "Why didn't you let me to come too and go get me some water I'm thirsty." So Erva and I felt very confident about charging into unknown territory when we had Himself with us.
It's difficult to describe what we saw, what we experienced, as we pushed our way down the steep trail that was partially overgrown mostly with wild pineapples and catch-n-keep. The wild pineapple, locally known as ping wing, is a bromelliad. It's two and three foot long leaves have spines all along the edges. The tip of the leaf is needle sharp. The whole plant can grow to three and four feet across and that tall as well. From their centers, like regular pineapples, a flower stalk will form, but instead of producing a single fruit, these plants produce a large cluster of almond-shaped fruits about the size of a kiwi. They turn yellow when they're ripe and are edible but extremely astringent. They cause your mouth to dry up and tingle. These plants grow in big massed clusters and are just about impossible to get through. I wish a had a picture to show you.
Catch-n-keep, an Acacia, is a viny bush. It drapes itself over anything that gets in its way and is a predominate plant in the bush. From a distance it is quite pretty with its feathery emerald green leaves. And when it blooms, as in the picture below, the hillsides are covered with large patches of white. It can look for all the world as if there has been a dusting of snow. 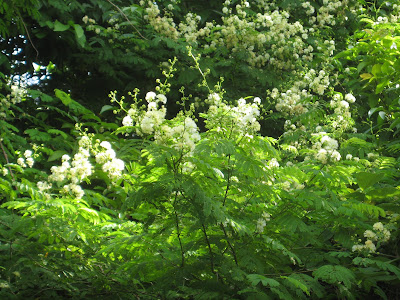 But every inch of it is covered in tiny hooked barbs. 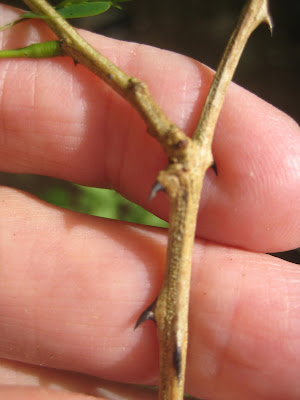 It ain't called catch-n-keep for nothin'. The thin, flexible, vine-like branches catch hold of whatever brushes against it and the more you tug in an effort to pull away, the more those little hooks dig in. There are only two ways to become untangled. One is to cut off the offending branches and gently pull them off or to carefully go forward into the bush so the hooks are loosened and gently extricate yourself. It is rather like those Chinese finger cuffs where the harder you pull to release your fingers, the tighter it becomes. You have to push the ends together to get free. It's the same sort of principle with the catch-n-keep. The only thing is, no matter how careful you are, you are bound to get scratches.
Erva and I, being either stupid or brazen bush-babies wore shorts and sneakers and probably sleeveless shirts. Suffice it to say Erva did battle with the ping wing and the catch-n-keep using her knife to cut away the spiked leaves and clawed branches but neither of us was spared a few sharp pokes or long scratches.
After we broke through the needles and thorns the trail opened up a bit. Now it was lined with maran bush (a wild sage) with its dusty silvery somewhat itchy leaves that were used for scrubbing pots. Down and down and down the hillside we went. The farther down we went the more open and the less tangled with bush the trail became, the more trees appeared. The trail was probably kept open by cows and goats foraging for food. Eventually we came to place where the trail crossed a small wash. We could see where it picked up on the other side but debated about whether to follow the wash to the left, or continue on the trail which sort of went to the right, but more straight ahead. We chose to follow the path. Since this was a fork in the "road" Erva made marks in the trees with her trusty knife.
We were now in a different environment. We were under a canopy of trees, genips mostly, but also mompoos and towering gre-gre trees. (Couldn't find a link.) There was also lots of wild tamarind and crumberries. I believe crumberries and guavaberries are the same thing. The crumberry trees produce dark blue-purple berries that look like a blue berry. They are delicious too. Wild tamarind is a member of the Mimosa family. It is very prevalent and can be kind of obnoxcious but at least it doesn't have thorns.
So there we were at the bottom, in a deep narrow valley between the hills. We had survived the claws of the dragon, the itching powder of witches, and had been rewarded for our bravery with cool shade. It was quiet down there, peaceful. The trail wound among the trees for a little way and then emptied itself into...the biggest, widest, most rock and bolder-strewn ghut either of us had ever seen.
Stay tuned for The Ghut - Part Two.
Posted by Bish Denham at 12:01 AM