No two dogs are alike, even dogs of the same breed. And anyone who has had dogs usually has stories of at least one that was tail and ears above the rest; a dog that was special. Maybe the dog was particularly smart, or loyal, or adventuresome, or just plain cute.

In our family, Happy was such a dog. I've mentioned him a few times. Most recently in the adventure Erva and I had discovering and exploring The Ghut. He was such a unique and interesting dog he is a character in my MG novel, A Lizard's Tail. (No doubt he will turn up in other stories.)
I was the one, who at about 6 1/2 years old, was allowed picked him out of the litter, so I'm the one who can be blamed for our having such a growlsome, ornery, smart, and totally devoted dog. We pretty much agree he was born ornery because he was born with a broken rib. His mother was a small nondescript tailless mutt named Heidi. His father, on the other hand, was a big yellow cur with a great sweeping tail. He could leap straight from the ground into the bed of a dump truck. So Happy was big puppy and in the process of being born one of his ribs broke. For all of his life we could feel it under the skin at the back of his ribcage near the hip, a rounded, pointy piece of bone. I suppose if I had been born with a broken rib I'd be ornery too.
Happy was one of three pups. When we went to pick him out I wanted the honey colored one with the short tail. But he had hidden himself under the couch so he had to be dragged out from under it. We should have known from his response what kind of dog we were getting. He growled and nipped and was most uncooperative.
The question was asked, "Are you sure this is the one you want?" Oh yes, this was the one I wanted. So that's the one we got.
On the ride home to Gifft Hill Erva and I spread our skirts across the back seat of the jeep. We made a kind of hammock for him so he wouldn't slide through the open space between the seat and backrest. Immediately we started in trying out names.
Because his fur was fluffy (even though it was short) and didn't lie flat we thought of Bear. Names like Rover and Spike and who knows what all else were suggested. But he didn't respond to any of them.
At some point while petting and admiring him I said something like, "Are you happy?" and his funny little tail (that looked for all the world like someone had tried to cut it off and missed) wiggled and wagged. And I said, "That's it! His name is Happy."
So that's how we acquired an ornery dog and named him, Happy. And here we are together when he was four or five months old. 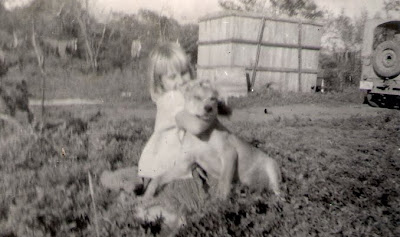 That's our jeep, The Yellow Dragon. The big wooden crate is what all of our "stuff," shipped from California, was packed it. Dad turned it into an "office" where he had his ham radio station and his tools. It looks like this picture could have been taken on a Saturday because Saturday was laundry day and blurry clothes can be seen hanging on the line to the rear left.

Stay tunes for few stories about Himself the Dog.
Posted by Bish Denham at 12:01 AM